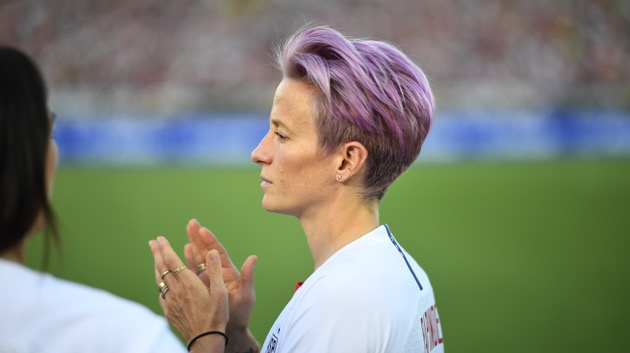 Scott Clarke / ESPN Images(New York) — U.S. women’s soccer star Megan Rapinoe has been named Sports Illustrated’s Sportsperson of the Year for 2019.The magazine announced Monday that Rapinoe, co-captain of the 2019 World Cup champions, was honored with “the most prestigious honor in all of sports media,” which is bestowed annually upon an athlete, coach or team who “best represents the spirit and ideals of sportsmanship, character and performance.”Rapinoe, who’s won two World Cups, was described by Sports Illustrated as a “fan favorite” and one of the national team’s “most technical players.” She also took home the tournament’s top honors: the Golden Boot, for the top scorer, and the Golden Ball, for the best player in the tournament, and in September was named Best FIFA Women’s Player for 2019.”A vocal leader on and off the pitch, Megan helped lead the USWNT to the 2019 Women’s World Cup Championship scoring some of the biggest goals of the tournament,” said the press release announcing Rapinoe’s latest award.Sports Illustrated also referenced Rapinoe’s tendency to use her platform to advocate for “equality for all.”This year, she’s been a stark supporter for gender equality, demanding that the women’s national team be paid the same as the men’s, and also criticized President Donald Trump, announcing in July that the team would boycott a visit the white house because Trump’s “message is excluding people.”Rapinoe appears on the cover of the Dec. 16 issue of Sports Illustrated carrying a sledge hammer that contrasts with a long, pleated white skirt and her signature violet hair.”Even in a year with many great candidates, choosing Megan as the Sportsperson of the Year was an easy decision,” said Steve Cannella, co-editor-in-chief of Sports Illustrated. “She is a force of nature on and off the field, a trailblazing soccer player who also proves every day how large and loud a voice a socially conscious athlete can have in 2019.”Rapinoe will be presented with the award Monday at the Ziegfeld Ballroom in New York City.Past Sportspersons of the Year include Houston Texans defensive end J.J. Watt, Houston Astros second baseman Jose Altuve, LeBron James, Serena Williams, Michael Phelps, Wayne Gretsky, Michael Jordan, Muhammad Ali, the Golden State Warriors and the U.S. Women’s National Soccer team.Rapinoe and her teammates are currently preparing for the 2020 summer Olympics in Tokyo. Copyright © 2019, ABC Audio. All rights reserved.