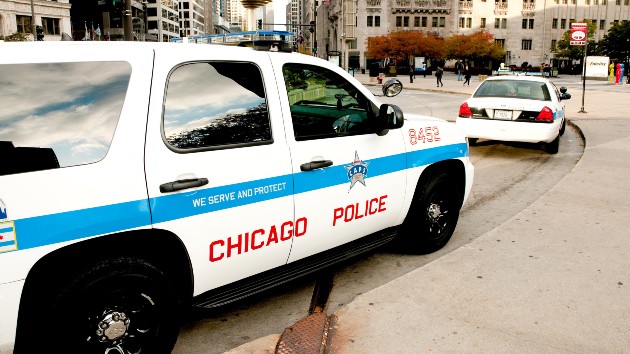 400tmax/iStock(CHICAGO) — A female Chicago police officer, allegedly seen drinking with then-police superintendent Eddie Johnson before he was found asleep in his vehicle, has been accused of tampering with evidence linked to an ongoing investigation of the incident.Cynthia Donald is under investigation for allegedly damaging her police-issued mobile phone and removing the SIM card, which stores the cellphone data. The device reportedly had been sought as potential evidence by the city’s Office of Inspector General, which is investigating Johnson over the October drinking incident.Authorities discovered the damage on Oct. 20, three days after Chicago police officers found Johnson asleep behind the wheel of his SUV. Donald was required to return the device after being transferred out of the then-superintendent’s security detail.The city’s inspector general is now investigating why the phone was returned damaged, according to the police department. Sources with knowledge of the matter told ABC Chicago station WLS-TV Johnson was seen dropping Donald off at Chicago Police Headquarters around two hours before he was found asleep behind the wheel. The department declined to comment on local media reports that claimed the phone had been sought as evidence by the office of city Inspector General Joseph Ferguson.”I can confirm media reports that we opened an investigation to determine why the phone was returned damaged,” Chicago Police Department spokesperson Anthony Guglielmi told ABC News in a statement Sunday. “At this point, we are not making any additional statements as we are awaiting the final report from the Inspector General and cooperating fully with his review.”Chicago Mayor Lori Lightfoot fired Johnson on Dec. 2, just weeks before he was scheduled to retire, due to what she called “ethical lapses.” Johnson said he pulled over because he was feeling light-headed and later fell asleep, but Lightfoot accused him of intentionally misleading city officials and the public in the aftermath.Lightfoot also said the inspector general’s report, which hasn’t been released publicly, showed Johnson exhibited “flawed decision-making.””It has become clear that Mr. Johnson engaged in a series of ethical lapses that are intolerable,” Lightfoot said in a statement last week. “Mr. Johnson was intentionally dishonest with me and communicated a narrative replete with false statements regarding material aspects of the incident that happened in the early morning hours of October 17.””Had I known all the facts at the time,” she added, “I would have relieved him of his duties as superintendent then and there.”An official briefed on the probe into Johnson’s conduct told ABC News that during the traffic stop in question, the superintendent showed his police ID when asked to present identification. The officers apparently didn’t recognize Johnson immediately. Once the superintendent showed ID, he and the officers exchanged some words, and Johnson said he was OK to drive away. The cops let him, raising questions about why Johnson wasn’t given a field sobriety test.Johnson acknowledged on Tuesday that he made a “poor decision and had a lapse of judgment” on that October night, but disputed the mayor’s claims that he had intentionally mislead the city.”I know in my heart that I have always tried to act in a way that is in the best interests of the great city,” Johnson said in a statement, noting that he had no interest in fighting for his reputation. “Reputations are not built in a day and not damaged in a day either.””I will simply rely on the reputation for integrity that I think I have earned during my long career,” he added, “with the faith that we should all be judged by the entirety of our lives and not on what happened on our worst days.” Copyright © 2019, ABC Audio. All rights reserved.