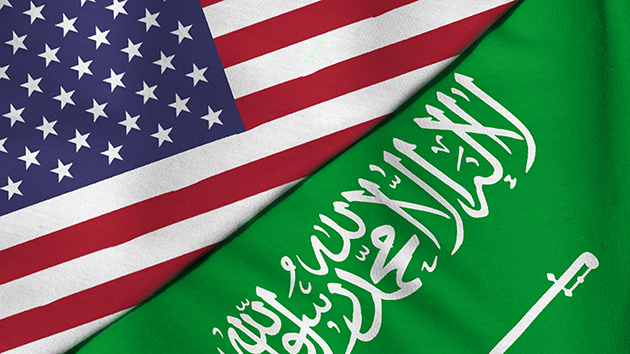 CIL868/iStock(WASHINGTON) — Even as the FBI investigates Friday’s Pensacola Navy base shooting on the presumption it was an act of terror, President Donald Trump has maintained a trusting tone toward Saudi Arabia, emphasizing the condolences of the Saudi royal family and highlighting their offers of assistance.After speaking with Saudi King Salman after the shooting, the president said the king and people of Saudi Arabia were “devastated” after a Saudi student national shot and killed three U.S. sailors at Naval Air Station Pensacola in Florida.“The King said that the Saudi people are greatly angered by the barbaric actions of the shooter, and that this person in no way, shape or form represents the feelings of the Saudi people, who love the American people so much,” the president said in remarks on Friday.The president even suggested in comments on Saturday that the Saudi royal family would be providing financial assistance to the victims’ families.“The King will be involved in taking care of families and loved ones. He feels very strongly,” the president. “I think they’re going to help out the families very greatly.”In addition to speaking with the king, the president also spoke with Saudi Crown Prince Mohammad Bin Salman on Sunday. The White House said in a statement that the president expressed appreciation for Saudi Arabia’s alliance and their assistance in the investigation during the call.“The Crown Prince reiterated Saudi Arabia’s commitment to working with the United States to prevent a horrific attack like the Pensacola shooting from ever happening again. The President thanked the Crown Prince for Saudi Arabia’s assistance with the investigation and continued partnership,” the statement said.The president’s defense of Saudi Arabia comes as the FBI has said they are investigating the incident on the presumption that it was terror.“We are, as we do in most active-shooter investigations, working with the presumption that this was an act of terrorism,” Rachel Rojas, special agent in charge of the FBI’s Jacksonville division, said.The shooter, Mohammed Alshamrani, 21, was a student naval flight officer in the U.S. as part of a program under which the U.S. military provides training forces of allied countries that purchase American-made military aircraft. There are currently more than 850 Saudi nationals in the US for military training and 5,181 total foreign military students.The shooter had been in the U.S. since 2017 as part of the training program and was scheduled to complete his training in August 2020.While the president has maintained only a friendly tone toward Saudi Arabia, one of the president’s staunchest congressional allies, Rep Matt Gaetz, has called on the U.S. to hit the pause button on accepting more Saudi students until the U.S. can establish confidence in its vetting program. He also suggested the incident could change the U.S. relationship with Saudi Arabia.“Of course, what happened is Pensacola has to inform on our ongoing relationship with Saudi Arabia. That is the message I directly delivered to the Saudi Ambassador when she called to offer her condolences,” Gaetz said on ABC’s This Week. Copyright © 2019, ABC Audio. All rights reserved.