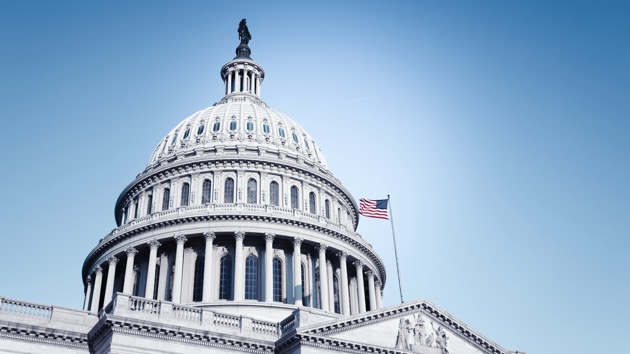 uschools/iStock(WASHINGTON) — House Democrats, just minutes after announcing two articles of impeachment against President Donald Trump on Tuesday, announced a deal with the White House on moving forward with a modified trade agreement between the U.S., Canada and Mexico.The new agreement appears to be a success for not only lawmakers, but also for President Trump and is a remarkable show of bipartisanship amid a polarized political scene in Washington. Trump had criticized Democrats as “do nothing” — pursuing only impeachment — and House Speaker Nancy Pelosi was determined to show otherwise.She wanted to show that Democrats could, at the same time, pursue business on behalf of working Americans and she also wanted to protect vulnerable Democrats in swing states ahead of the 2020 election.“It is infinitely better than what was initially proposed by the administration,” House Speaker Nancy Pelosi said during a Tuesday morning news conference. “It’s a victory for America’s workers.”House Democrats said they were determined to alter the conversation about trade with a modified North American trade pact. The new deal focuses on revised provisions for the enforcement of labor compliance obligations, environmental violations that affect trade and investment, the removal of barriers that contribute to high prescription drug prices and ensuring fair competition among the three countries, according to a statement from the House Ways and Means committee. “We made this agreement,” said Rep. Richard Neal, D-Mass., chairman of the House Ways and Means committee.House Republicans seemed pleased, too, with Minority Leader Kevin McCarthy, R-Calif., saying Trump showed “the art of the deal” in negotiating the USMCA deal to make it happen.The president’s top trade representative, Robert Lighthizer, and Trump’s son-in-law, Jared Kushner, traveled to Mexico on Tuesday morning in anticipation of the potential finalization of the USMCA trade deal, Trump administration sources confirmed to ABC News.Just before the Democrats spoke, Trump tweeted that the “great USMCA trade bill is looking good.”

America’s great USMCA Trade Bill is looking good. It will be the best and most important trade deal ever made by the USA. Good for everybody – Farmers, Manufacturers, Energy, Unions – tremendous support. Importantly, we will finally end our Country’s worst Trade Deal, NAFTA!

While the president continues to say that the deal will “end our Country’s worst Trade Deal, NAFTA,” his implication that the USMCA is a monumentally different agreement is misleading. USMCA makes some tweaks to the North American Free Trade Agreement, but it is not as dramatically different as the president suggests.Trump spoke Monday with Canadian Prime Minister Justin Trudeau Monday, whom he called “two-faced” last week after the Canadian leader was caught on camera joking about his meeting with Trump. During the call, the the two leaders discussed USMCA, and Trudeau offered his condolences for the Pensacola, Florida, naval base shooting, according to Trudeau’s office.The White House has not released a readout and didn’t respond to a request for one.The call comes after Trump earlier Tuesday said he was “hearing very good things” about USMCA negotiations.”I’m hearing a lot of strides have been made over the last 24 hours with unions and others,” Trump said Monday afternoon.Canadian media reported on Monday that Canada’s Deputy Prime Minister Chrystia Freeland would also travel to Mexico City on Tuesday to meet with Mexican and American officials about USMCA.