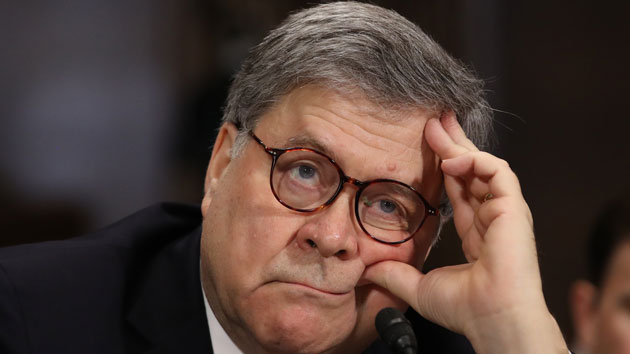 Win McNamee/Getty Images(WASHINGTON) — Attorney General William Barr on Tuesday described the Russia investigation as a “travesty,” and lambasted former FBI officials involved in opening the probe, claiming “the greatest danger to our free system” is that the Obama administration “spied” on the Trump campaign in a way that he said sought to influence the 2016 election.”From a civil liberties standpoint, the greatest danger to our free system is that the incumbent government used the apparatus of the state, principally the law enforcement agencies and the intelligence agencies, both to spy on political opponents, but also to use them in a way that could affect the outcome of the election,” Barr said in an interview with NBC News.Barr’s assessment followed Monday’s release of Department of Justice Inspector General Michael Horowitz’s report examining the origins of the 2016 investigation into Russian interference in the U.S. election. While Horowitz heavily criticized the actions of FBI officials involved in the investigation, he determined the investigation was launched with proper cause and said he found no evidence that political bias had influenced the FBI’s decision to open it.But Barr split with Horowitz and FBI Director Christopher Wray over the finding that the investigation was properly predicated, noting he has mounted a separate investigation with U.S. Attorney John Durham with a broader scope that includes a focus on other intelligence agencies and foreign governments.In his Tuesday interview, Barr argued Horowitz didn’t officially decide there was no political motive behind the FBI’s decisions in the Russia investigation, just that he could not find any evidence to support that. Horowitz will testify Wednesday before the Senate Judiciary Committee on his findings.”The core statement in my opinion by the I.G. Is that these irregularities, these misstatements, these omissions were not satisfactory explained and I think that leaves open the possibility for bad faith,” Barr said. “I think it’s premature now to reach a judgment on that, but I think further work has to be done and that’s what Durham is doing.”Barr said that he wasn’t completely certain in terms of a timeline for when Durham may finish his work, but said he expects it could reach a potential head “in late spring or early summer.” If so, it would come in the middle of the 2020 presidential campaign.Barr took particular issue with the findings by Horowitz that agents responsible for applying for a surveillance warrant to monitor former Trump campaign adviser Carter Page were found to have included at least 17 significant errors and omissions that would have potentially affected the probable cause standard necessary for the warrant’s approval and renewals.”Their case collapsed after the election and they never told the court,” Barr said. “And they kept getting renewals on the applications. There were documents falsified in order to get the renewals. There was all kinds of withholding of information from the court. And the question really is what was the agenda after the election that kept them pressing ahead, after their case collapsed?””I think that there were gross abuses of FISA and inexplicable behavior that was intolerable in the FBI,” Barr said. “And the attorney general’s primary responsibility is to protect against the abuse of the law enforcement and intelligence apparatus.”Barr has faced criticism for how he initially framed the findings of special counsel Robert Mueller in releasing his report documenting extensive contacts between the Trump campaign and Russia in 2016, and emphasized Tuesday his belief that the probe was constructed entirely out of a “bogus narrative.”“Our nation was turned on its head for three years based on a completely bogus narrative that was largely fanned and hyped by an irresponsible press,” Barr said. “When you step back here and say, ‘What was this all based on? It’s not sufficient.”Barr doubled down on his criticisms in a sit-down with the WSJ CEO Council, arguing the investigation was a “travesty,” and it was “flimsy” for the FBI to start the it based on former Trump campaign aide George Papadopoulos’ communications in July 2016 claiming to a diplomat that he knew the Russians had ‘dirt’ on Hillary Clinton.”There were many abuses, and that’s by far the most important part of the [inspector general] report,” Barr said.Barr was also asked about President Trump’s tweet attacking FBI Director Chris Wray earlier Tuesday, and suggested he sympathized with the president in believing Wray downplayed the IG’s findings.”I think what the president was getting at, and I feel the same way, is that we can’t ignore the abuses of the past. And appear to be justifying them or minimizing them,” Barr said, later adding he still had confidence in Wray as director.While FBI Director Wray told ABC News in an exclusive broadcast interview the bureau has “no evidence” to support the baseless theory of Ukrainian interference in the 2016 election more recently pushed by Republicans in the impeachment probe, Barr declined to say either way whether Ukraine interfered in 2016.”I don’t know about the Ukrainians,” Barr said. “I haven’t even looked into it, quite frankly.” Copyright © 2019, ABC Audio. All rights reserved.