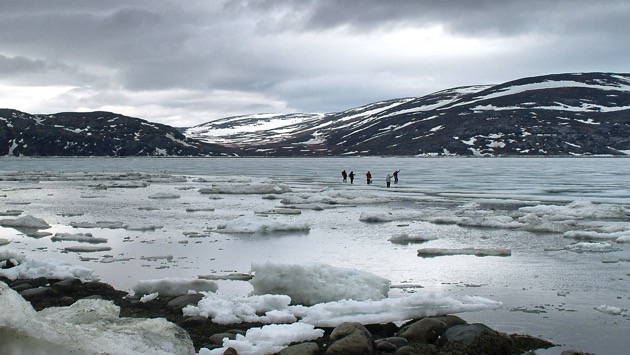 StphaneLemire/iStock(NEW YORK) — A new mobile app could help members of the Inuit indigenous community to navigate the effects of climate change.Named after the Inuktitut word for sea ice, Siku provides tools and services for ice safety, language preservation and weather, according to its website. It also allows users to share ice and weather hazard reports and hunting stories, and provides alerts for land, marine and ice weather in the area.”The weather’s changing, the ice conditions are changing, and when we’re driving a snow mobile or walking we have to think before we get on that ice,” Inuit hunter Puasi Ippak said in a promotional video for the app.Siku, developed in conjunction with the Inuit Arctic Eider Society, combines ancient knowledge with modern technology, according to UNESCO.The project was born after Inuit elders expressed a desire to document and share oral history with young people, Joel Heath, executive director of the Inuit Arctic Eider Society, said Wednesday during the app’s launch at the ArcticNet conference in Halifax, Nova Scotia, according to The Canadian Press.”Oral history has been a big part of Inuit tradition,” another Inuit hunter said in the video. “Nothing was written, so everybody just had a good memory.”The community used to get its information from five different websites before the creation of the app.Siku addresses unique needs for the Inuit that other modern forums for community gathering like Facebook and Twitter don’t, Lucassie Arragutainaq, manager of the Sanikiluaq Hunters and Trappers Association, told The Canadian Press. Its main types of posts are social, wildlife, sea ice and tools.The Siku project was awarded $750,000 in funding after it won the 2017 Google.org Impact Challenge in Canada.Inuit is a term used to characterize native peoples inhabiting arctic regions of Canada, Alaska and Greenland.The Inuit Arctic Eider Society did not immediately respond to ABC News’ request for comment. Copyright © 2019, ABC Audio. All rights reserved.