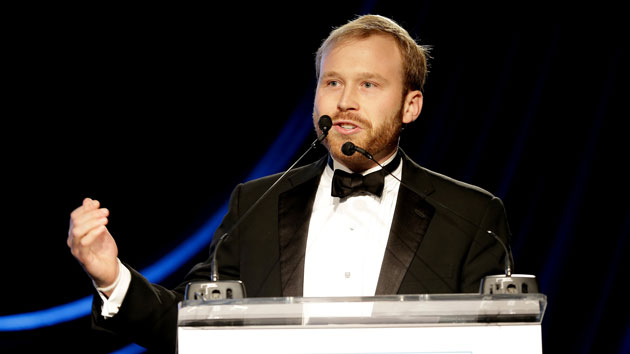 Bob Levey/Getty Images for U.S. Fund for UNICEF(FORT WORTH, Texas) — Pierce Bush, the grandson of the late President George H.W. Bush, launched a congressional bid Monday, hoping to extend the Bush political dynasty within the bounds of Texas.But the young Bush’s announcement in a state President Donald Trump carried by 9 points in 2016 comes amid the the complicated and at times antagonistic relationship between Trump and the Bush family.Bush, a nonprofit executive, enters the political sphere as a newcomer but with one of Texas’ most famous last names and the donor network that comes with it, giving him an edge in a Texas-sized primary for the state’s 22nd congressional district.The contest saw an influx of contenders after GOP Rep. Pete Olson announced he’s not seeking a seventh term in late July, which set up a wide open race for the toss up seat that is a top target for Democrats after they nearly flipped the district last year.But among Bush’s hurdles as he competes for the district, which covers part of Houston’s suburbs including Fort Bend County, is not only the size of the field as 2020’s most crowded congressional race, and the district’s waning support for the Republican Party, but also the long-standing clash between President Trump and his family, particularly, his grandfather as well as his uncle, former Texas governor and U.S. President George W. Bush.While Trump and Bush’s political stories have intersected as far back as 1988, it was during the 2016 election, when Trump faced off against Jeb Bush, that the 41st president called Trump a “blowhard” at the height of the feud, according to the 2017 book “The Last Republican.”The elder Bush, who died last year, ultimately opted to vote for Hillary Clinton, the Democratic nominee, in 2016 over Trump.But Trump has found allies within the Bush lineage. Earlier this year, during a stop in Texas, Trump introduced Texas Land Commissioner George P. Bush, who has campaigned on his support for the president, calling him “the only Bush that likes me.”Amid the long-running rift between Trump and the Bush family, and the president’s takeover of the Republican Party, Pierce Bush’s last-minute entrance, on the day of Texas’ filing deadline, could implicitly remind Republican voters of the pre-Trump era, when the Bush family represented the top of the ticket.But as he navigates running for Congress in the Trump era, the CEO of Big Brothers Big Sisters Lone Star appears to be following suit with the only Bush currently in public office, by aligning himself with Trump, despite not mentioning the president in his announcement video.”We all know that socialism has failed everywhere and everyone,” Bush said in the video. “It’s time for new leaders to stand for conservatism that empowers all Americans, placing individuals above government and ensuring that we all have the freedom to achieve success in life.”Bush’s campaign did not immediately respond to ABC News’ request for comment.Despite the outsize significance of his last name, Bush will also have to confront more local challenges in a changing Texas.Fueling Democrats’ nearly quarter-century-held hopes of turning Texas blue is, in part, the changing demographics within the state — including what FiveThirtyEight calls population growth “in and around the state’s cities.”In the district, Republican support has declined in recent cycles: after Olson carried the district by 19 points in 2016, by 2018, Olson saw his winning margin narrowed to only five points.Bush is running to keep control of the district in the party’s grip across an expanded battleground map in Texas, and up against Democrats’ aggressive push to court suburban voters — a key voting demographic that was once the bedrock of the GOP but has been shifting away from the party under Trump.Now, the race to replace Olson, one of six House Republicans from Texas retiring this cycle, as part of what Democrats call “Texodus,” is swelling with options, with at least 17 other Republicans running for the seat, according to the Texas Tribune.Among those in the contest is Fort Bend County Sheriff Troy Nehls, and Kathaleen Wall, a wealthy Republican donor who poured millions of her own cash into an unsuccessful 2018 congressional bid.

The Texas GOP extolled the slate of candidates on Tuesday, urging that the party is “motivated” by the “rise of socialism” and congressional Democrats’ impeachment of Trump.

“We’re not surprised to see the incredible number of candidates who have filed — Republicans are motivated to fight the rise of socialism and tired of Congressional Democrats propping up a baseless impeachment process,” said Republican Party of Texas Chairman James Dickey in a statement to ABC News. “Republicans are excited about representing Texas and motivated to defend our nation and deliver results that all Americans deserve.”

Meanwhile, the state Democratic Party called the brimming primary field “off the rails.”

“The Republican Primary for CD 22 is officially off the rails. While Republicans are battling it out and facing down the prospects of a long and expensive primary, Democrats are gearing up to take back the district and win in the increasingly diverse Fort Bend County,” said Abhi Rahman, communications director for the Texas Democratic Party.