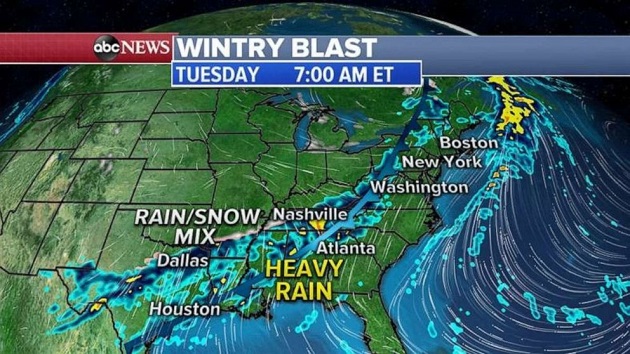 ABC News(NEW YORK) — A fast moving storm system with an arctic cold front brought up to 6 to 14 inches of snow from the Dakotas to Minnesota and into Wisconsin producing treacherous driving conditions during a busy Monday morning commute.Further south, a quick burst of snow with this arctic cold front created numerous spinouts and accidents from Nebraska to Iowa and even a multi-vehicle pileup on I-80 was reported Monday.On the warm side of this arctic cold front, heavy rain has been falling in the East from Texas all the way to Maine. Minor flooding was reported in spots.On Tuesday morning, this cold front stretches from Texas to New England with heavy rain along with it, and even some snow is trying to mix in northern Texas and into Arkansas and Tennessee.As this cold front moves east, rain will change to snow in Memphis and Nashville, Tennessee, and all the way into the Northeast.A Winter Weather Advisory has been issued from New Jersey to Massachusetts for 1 to 4 inches of snow Wednesday morning.Snow accumulations will not be great in the South. There might be a dusting in Tennessee but, as we saw on Monday, it does not take much to make those roads slick once the temperature falls below freezing.A dusting of snow is also possible in Washington, D.C. and Philadelphia, and New York City may get 1 to 2 inches while southern Massachusetts could see up to 4 inches. Roads could be very slick Wednesday morning during rush-hour.Behind this cold front is an arctic air mass headed for the northern Plains, the coldest air of the season. Temperatures Tuesday morning in the Twin Cities has dipped below zero for the first time this year with wind chill near 20 below zero.On Wednesday morning, temperatures will be even colder with wind gusts making it feel like it’s 20 to 40 below zero. A wind chill advisory has been issued for the Dakotas, Minnesota and Wisconsin where frost bite can occur in as little as 10 minutes on any exposed skin.Some of the coldest air will spill East and South by Thursday with wind chills in the single digits in the Northeast and it will feel like it’s in the 20s and 30s across the Deep South.