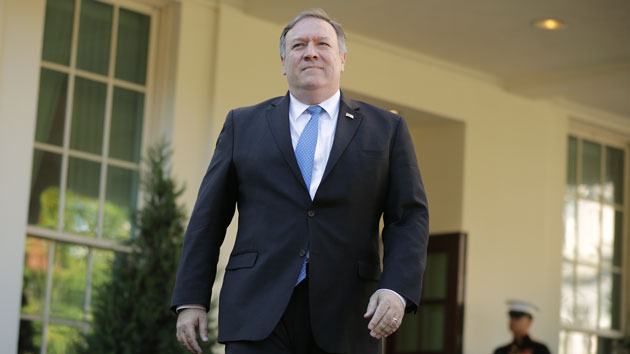 Chip Somodevilla/Getty Images(WASHINGTON) — Secretary of State Mike Pompeo says he warned Russian Foreign Minister Sergei Lavrov about any further Russian interference in U.S. politics during their news conference on Tuesday, even as Lavrov again claimed Russia did not interfere.”On the question of interference in our domestic affairs, I was clear: It’s unacceptable and I made our expectations of Russia clear,” Pompeo said during the joint press conference. “The Trump administration will always work to protect the integrity of our elections, period.”Pompeo added, “Should Russia or any foreign actor take steps to undermine our democratic processes, we will take action in response,” though he wasn’t specific about the potential ramifications.Despite Russian interference, warnings about potential meddling in the 2020 presidential race, and its malign activity in Syria, Ukraine, Venezuela, and elsewhere, Trump has consistently called for restoring relations with Moscow.Both top diplomats said there is now an opportunity to do so, with Pompeo teasing a “significant announcement” on economic ties “in the near future.”Lavrov met with President Donald Trump at the White House on Tuesday afternoon, in a closed-door meeting with Pompeo present — two and a half years after a similar meeting ignited a firestorm when Trump shared classified information with him and Russia’s ambassador to the U.S.There was no immediate readout of Tuesday’s meeting, but Russia’s political interference has continued to hang over the relationship.Lavrov again denied Russian interference and falsely claimed the U.S. had not provided any evidence of it: “No one has given us this proof, because it doesn’t exist.”He added that U.S. accusations had cast a “wave of suspicions in Washington” that have hindered U.S.-Russian relations. He pushed for the U.S. to agree to publish communications between the Obama administration and the Kremlin during Fall 2016 and Winter 2017, after the U.S. intelligence community first accused Russia of interfering in the 2016 race.Pompeo pushed back on that slightly, saying the U.S. will publish documents it thinks are “appropriate,” but, adding “we’ve shared plenty of facts to show what happened in the 2016 election with our Russian counterparts. We don’t think there’s any mistake about what really transpired there.”But Pompeo himself has backed Trump’s calls to investigate a debunked theory that Ukraine also interfered in that election. Lavrov said the notion of Ukrainian interference is between the U.S. and Ukraine, but cited it as evidence of the “absurdity of accusations against us.”Russian officials have promoted the idea of Ukrainian interference to distract from Russia’s interference, according to U.S. officials, including Fiona Hill — Trump’s former top Russia official on the National Security Council.Ukraine was a “major part” of their conversations, according to Pompeo, who said he was “proud” of the Trump administration’s work to support the country’s sovereignty and security. But notably, one day after Putin had talks with Ukrainian President Volodymyr Zelenskiy, along with France and Germany, it was Russia’s foreign minister arriving in Washington to brief the U.S. on those meetings, not Ukraine’s.Zelenskiy and his aides had sought an Oval Office meeting with Trump — similar to the one Lavrov received on Tuesday — to establish U.S. support for his young administration and its reform agenda. That meeting still has not happened, and now the charge that Trump conditioned any meeting on Ukraine launching investigations to benefit him politically is at the heart of the House impeachment articles revealed earlier that morning.Pompeo declined to respond in full to the impeachment articles, which include his department’s refusal to turn over documents as part of the charge of obstruction. Instead, he defended that refusal, essentially denying there is a legal obligation to comply with House subpoenas.Pompeo said the department “has fully complied with all legal requirements. We will continue to do so.”In addition to Ukraine and political interference, Pompeo and Lavrov said they discussed key items including arms control, North Korea, the detention of U.S. citizen Paul Whelan, and diplomatic issues like visas and property.Copyright © 2019, ABC Audio. All rights reserved.