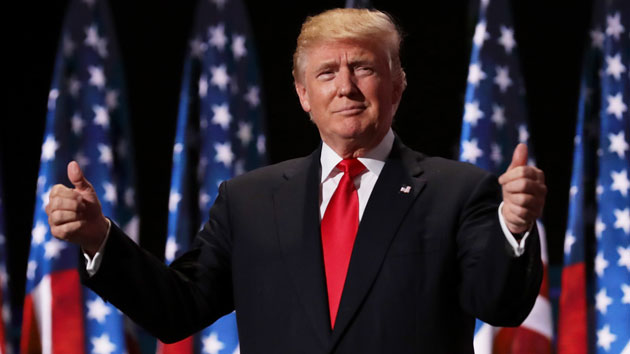 Chip Somodevilla/Getty Images(WASHINGTON) — Hours after House Democrats unveiled two articles of impeachment against President Donald Trump, he blasted the charges at a packed campaign rally in the crucial swing state of Pennsylvania.The president specifically lashed out at House Democrats for announcing articles of impeachment just before also announcing they had struck a deal with the White House on the modified trade agreement between the U.S., Canada and Mexico.”(Democrats) announced impeachment, then an hour later she announced that she is going to do USMCA,” Trump said. “Because you know why, it’s a huge deal and it plays out impeachment because they are embarrassed by the impeachment.””These people are crooked,” Trump said, now just the fourth president in American history to face impeachment charges, adding that Democrats were trying to “overthrow our democracy.”

At Pennsylvania campaign rally, Pres. Trump says the ‘impeachment witch hunt having to do with Ukraine’ is ‘already failing.’“This is the lightest impeachment in the history of our country by far.” https://t.co/pZKsivQ7iO pic.twitter.com/LibMSW0Wd3

Trump blasted the two articles of impeachment “flimsy” and “pathetic,” adding Democrats were “are impeaching me and there are no crimes. This has to be a first in history.”House Judiciary Committee Chairman Jerry Nadler announced on Tuesday morning that Democrats were going forward with charges of abuse of power and obstruction of Congress.”The president’s continuing abuse of power has left us no choice,” House Intelligence Committee Chairman Adam Schiff said. “To do nothing would make ourselves complicit in the president’s abuse of his high office, the public trust and our national security.”And while Democrats have moved forward with impeachment at a breakneck pace, Senate Republicans on Tuesday signaled a potential impeachment trial would wait until after holiday recess. Also, they may not call up live witnesses to testify despite Trump’s public push.”I think the prospect of calling witnesses, in my view, seems unlikely, as much as some people might like to complete the incomplete record,” Sen. Kevin Cramer, R-N.D., told reporters on Tuesday. “The premise of the whole impeachment process is so warped that completing a bad record just doesn’t make a whole lot of sense to me.”On the ground in Pennsylvania, a state that was crucial to Trump’s win in 2016, Trump’s supporters remained confident the Democratic push would end up helping his reelection efforts next year.”I think it helps the president. I wouldn’t worry about it,” Mario Girardi, a supporter wearing an NRA hat told ABC News. “I think it’s all a crock.”Chris Bishop, who said the economy is his top voting issue, echoed a key sentiment that the president and the campaign have used to push back against impeachment: Democrats are trying to impeach Trump because they can’t win in 2020.”Well, this is their election,” he said. “They don’t have a candidate that can run against the president so they are trying to pull this stunt.”The president won the Keystone state in 2016 by less than 1 percentage point in 2016 and Tuesday’s rally marks just the second time in 2019 Trump rallied in Pennsylvania. Copyright © 2019, ABC Audio. All rights reserved.