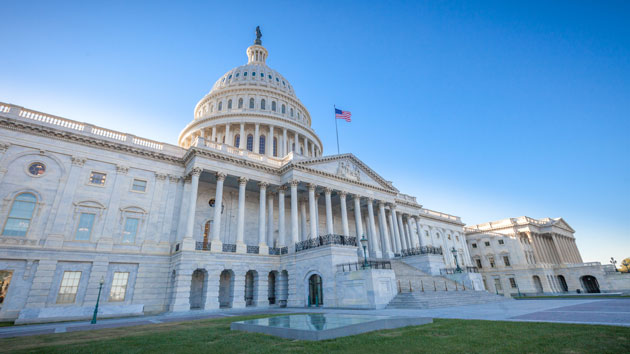 iStock(WASHINGTON) — House Speaker Nancy Pelosi announced Wednesday that later in the day the House would debate and then vote Thursday on a bill that she said would reduce prescription drug costs, the latest example of Democrats drawing attention to their legislative efforts while they pursue impeachment.”I have seen grown men cry about how they cannot meet their families needs because of the crushing burden of prescription drug costs,” Pelosi said Wednesday, announcing Democrats have the votes to pass the legislation.Although Pelosi didn’t mention impeachment, the drug cost bill announcement comes one day after House Democrats formally filed two articles of impeachment against President Donald Trump and followed minutes later with a press conference on a modified trade deal between the U.S., Canada and Mexico.The legislation, titled the Elijah E. Cummings Lower Drug Costs Now Act in memory of the late Congressman, seeks to reduce the high prices of prescription drugs by negotiating costs through Medicare and its vast bargaining power.Unlike the trade deal, Trump, who ran on a platform of lowering drug costs, opposes the measure.The White House Office of Management and Budget released a statement Tuesday night, saying, “If H.R. 3 were presented to the President in its current form, he would veto the bill.”House Majority Leader Steny Hoyer, D-Md, joined Pelosi at the news conference and called directly on the Trump to follow through with his campaign promise by supporting the legislation.”Mr. President, I urge you to come together as we have provided a bill consistent with what you said your polices were going to be,” Hoyer said. “No one should have to choose between medications they need or paying their rent or putting food on the table.”The Democratic leaders quoted Trump more than once on Wednesday, from when he told a crowd at a campaign rally in Exeter, New Hampshire, in February 2016, “When it comes time to negotiate the cost of drugs, we are going to negotiate like crazy.”But as president, Trump appears to have changed strategies.Anotherstatement released by the White House last week cited the potential for drug manufacturers to lose money and for fewer new drugs may to enter the market as some of the reasoning for not supporting the legislation.”Heavy-handed government intervention may reduce drug prices in the short term, but these savings are not worth the long-term cost of American patients losing access to new lifesaving treatments,” it read.A preliminary analysis from the Congressional Budget Office or CBO found that the core provision of the bill would save Medicare $345 billion between 2023 and 2029, but the legislation may reduce the introduction of new drugs to the market in the long-term, as Republicans have noted.The bill to reduce drug prices also comes on the heels of the Trump administration’s executive order signed in November that will require hospitals to disclose negotiated rates with insurance companies in 2021. The Democrats’ bill takes that transparency a step further, extending negotiations into all Medicare plans. Those negotiated prices will then become available on private health insurance plans as well.Other highlights of the AARP-endorsed legislation include a $2000 a year cap on out-of-pocket costs for all seniors on Medicare, an additional $7.5 billion to fight the opioid epidemic and reinvesting Medicare savings into the expansion of community health center, according to the speaker’s office.Two private citizens also joined House Democrats at Wednesday’s event to share their stories: Caroline Corum, a registered nurse fighting breast cancer and Jim Riordan, a retiree struggling to pay for his $4800 asthma medication each month.”Despite having good insurance, I live in fear of not being able to afford the medicine I need to treat my cancer,” Corum said. “Our lives depend on your vote.”Riordan added after her, “if [this] became law, I could literally breathe a sigh of relief.”The day before, Trump considered Tuesday’s announcement on the House’s trade deal as a win for his base, according to White House press secretary Stephanie Grisham, despite the president berating House Democrats as “do nothing” in recent months. Pelosi has continued to combat that narrative.Senate Majority Leader Mitch McConnell said Tuesday the Senate will not take up the trade legislation until after the near-imminent impeachment trial of the president has concluded.”What is not possible obviously would be to turn to an impeachment trial or to do USMCA in the Senate before we break for Christmas,” McConnell said Tuesday.The bill’s sponsor, Frank Pallone Jr., D-N.J., added at Wednesday’s press conference, “We’re going to do this tonight and pass it tomorrow.” Copyright © 2019, ABC Audio. All rights reserved.

Extreme heat safety tips: What to know about heat stroke vs. heat exhaustion