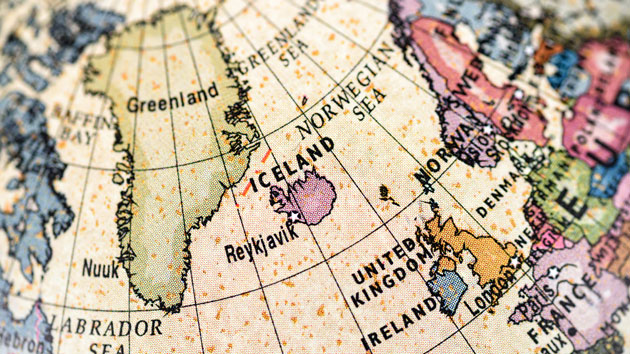 iStock(NEW YORK) — About 400 million people could be at risk for flooding by the end of the century should the Greenland ice shelf continue to melt at its current pace, according to a new study.The ice shelf, one of Earth’s largest, is widely considered to be the largest annual contributor of water into the ocean, and it’s expected to be a major contributor to global sea-level rise, according to the study, published in the journal Nature on Tuesday.The study, commissioned by NASA and the European Space Agency, compared a combination of 26 satellite measurements of changes in the ice sheet’s volume, flow and gravitational potential to produce a “reconciled estimate” of its mass balance.The ice sheet was close to a state of balance in the 1990s, at about 25 billion metric tons per year, but annual loses have risen considerably, peaking at a loss of about 335 metric tons in 2011. The ice sheet has lost a total of about 3.8 trillion metric tons between 1992 and 2018, causing ocean levels to rise by an average of about 10 millimeters, according to the study.For comparison, 10 millimeters is about .4 inches, meaning 25 millimeters would be roughly an inch.The study’s findings present “irrefutable evidence” that the Earth is on track for one of the most “pessimistic” models for rising sea levels, said Erik Ivins, lead scientist at NASA’s Jet Propulsion Laboratory in Pasadena, California, and one of the study’s authors.Cumulative ice losses from Greenland as a whole have been close to the rates predicted by the United Nations’ Intergovernmental Panel on Climate Change for a high-end climate warming scenario, which forecasts an additional 50 to 120 millimeters of sea-level rise by 2100, the study states. The findings of the study predict an additional 70 to 130 millimeters by 2100.Jason Smerdon, a climate scientist for Columbia University’s Lamont Doherty Earth Observatory, told ABC News it’s “concerning” that the findings of the study are matching up with the IPCC’s worst-case predictions, adding that there are some cases where the rate of change scientists are observing outpaces even those scenarios.”The fact that the melting in Greenland is on the high end of what people have estimated is concerning, it suggests that these processes are melting the ice sheet as fast as we expected it to melt given worst-case scenario,” Smerdon said.Smerdon also described the current levels of greenhouse gas emissions as “business as usual,” which will contribute heavily to the earth’s warming until they’re reduced on a large scale.If the melting continues on its current pace, by the end of the century an additional 100 million will be at risk of flooding annually, increasing the total number at risk to 400 million, said University of Leeds Professor of Earth Observation Andrew Shepherd, lead author of the study.Even a small increase of in sea level can have “devastating effects” on ports and coastal zones, Ivins said.”As a rule of thumb, for every centimeter rise in global sea level, another 6 million people are exposed to coastal flooding around the planet,” Shepherd said in a statement.Those populations will be susceptible to more dramatic storm surges and high tides as well as exacerbated weather events such as hurricanes, as the disappearance of Greenland’s ice sheet, the only permanent ice sheet outside Antarctica, will speed up the warming of the planet as whole, according to the study.The number of people who are affected could be even higher, considering that storm surges and strong Nor-easters have the potential to displace residents and inflict damage to infrastructure further inland, far beyond a meter of sea-level rise, Smerdon said. “When you start thinking about static sea level … estimating the number of people who can be impacted increases significantly.”Copyright © 2019, ABC Audio. All rights reserved.