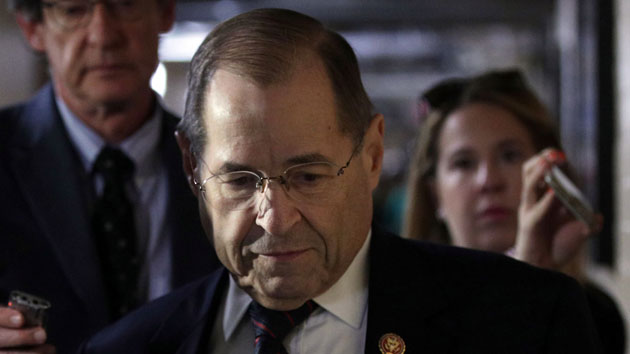 Alex Wong/Getty Images(WASHINGTON) —  House Judiciary Committee Chair Jerry Nadler gaveled in a hearing of the House Judiciary Committee at 7 p.m. on Wednesday, kicking off the committee’s marathon session to approve two articles of impeachment against President Donald Trump for debate and approval, holding a “markup” — a public meeting where members can debate and offer amendments to the charges — ahead of a House floor vote next week.”Taken together, these two articles charge President Trump, with placing his private, political interests above our national security, and above our free and fair elections, and above our ability to hold public officials accountable,” Nadler said.He ticked through the articles, and defended Democrats’ timetable.”Some ask, why not take more time?” Nadler asked.”One indisputable truth has emerged,” he continued. “If we do not respond to President Trump’s abuses of power, they will continue.”He also delivered a message to Republicans:”I know you. I have worked with many of you for years. I consider you to be good and decent public servants. I know this moment may be difficult, but you still have a choice,” he said.”One way or the other, President Trump will not be president forever,” he added. “His time has passed, his grip on our politics is gone when our country returns as truly it will — stronger ties, stronger leadership — history will look back on our actions here today. How would you be remembered?”Ranking Member of the House Judiciary Committee Rep. Doug Collins, R-Ga., responded with a passionate and fiery opening statement repeating many of his past criticisms, before ticking through examples of what he called “the big lie” by the Democrats.”What’s the big lie? It’s the one Democrats have told the American people for the last three years,” Collins said, defending Trump. “The big lie is that the ends justify the means. The big lie is that a sham impeachment is OK because the threat is so great. The big lie is that political expedience is honorable and justifiable. History has shown that to be untrue and dangerous.”Rep. Louie Gohmert, R-Texas, ticked through a list of fact-witnesses Republicans have requested to hear from, including the individual some Republicans have publicly alleged is the whistleblower who called attention to Trump’s discussion with Ukrainian President Volodymyr Zelenskiy. He also went as far as to call this “a sad day for America.”Nadler also acknowledged the absence Rep. Ted Lieu, D-Calif., who underwent a heart procedure at George Washington University Hospital and will miss the week’s hearings. but said he would be watching “a lot of TV.”Each lawmaker on the 41-member committee will have the opportunity to make a five-minute opening statement before the committee reconvenes Thursday morning to continue debate and to make any changes to the wording.It’s unlikely that Democrats will approve any substantive changes to the articles before the expected party-line vote to send them to the full House Thursday ahead of final votes next week, setting the stage for a Senate trial beginning in January.House Judiciary Chairman Jerry Nadler announced Tuesday that Democrats were going forward with charges of abuse of power and obstruction of Congress.Nadler, flanked by House Speaker Nancy Pelosi and House Intelligence Chairman Adam Schiff, said Trump had “violated his oath to the American people.”Schiff, whose committee led the impeachment probe with regard to Ukraine matters, said the evidence of Trump’s misconduct is “overwhelming and uncontested” and said he left them no choice but to act.”The president’s continuing abuse of power has left us no choice,” Schiff said Tuesday. “To do noting would make ourselves complicit in the president’s abuse of his high office, the public trust, and our national security.”At a campaign rally Tuesday night in Hersey, Pennsylvania, Trump derided the the articles “flimsy, pathetic” and “impeachment-lite” saying they don’t allege “bribery” or any other “crimes.”Copyright © 2019, ABC Audio. All rights reserved.