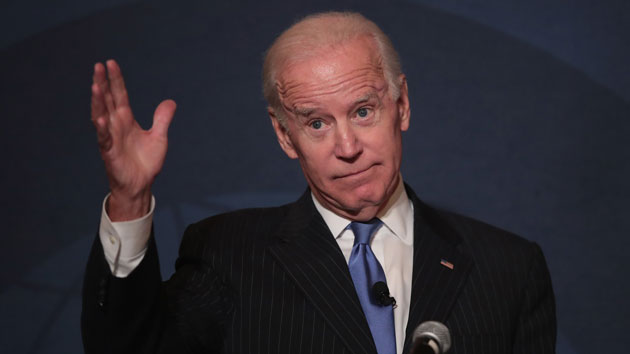 Scott Olson/Getty Images(WASHINGTON) — Former Vice President Joe Biden denied discussing with his campaign advisers whether he would only seek one term in office if elected president– claims that were first published by POLITICO Wednesday.The report cited anonymous advisers to Biden who said there have been internal conversations about recent signals from the 77-year-old former vice president would only seek one term if elected in 2020.“No, I never have,” Biden said when asked by a reporter on Wednesday if those discussions were taking place. “I don’t have any plans on one term.”A senior adviser for Biden’s campaign has also pushed back on the report, calling it “just not true.”“Maybe there’s an alternative Biden campaign where these things are being discussed,” the adviser told ABC News.“You’ve heard him say how presumptuous it is to speculate about a VP. How much more presumptuous is it to say you’re only going to serve one term?” they added.Biden’s campaign and deputy campaign manager also took to Twitter to categorically denying that any have taken place.“Lots of chatter out there on this so just want to be crystal clear: this is not a conversation our campaign is having and not something VP Biden is thinking about,” Kate Bedingfield, Biden’s deputy campaign manager tweeted.“Not sure what orbit of advisers reporters talk to, but count me with @KBeds, this is not a conversation we are having among people who actually are running the campaign. Also – hope everyone is seeing all the endorsements coming out for @JoeBiden,” Biden’s Campaign Manager, Greg Shultz tweeted.Biden, who would be 78 on inauguration day and the oldest president ever elected, often faces questions about his age on the trail and throughout his run for president has pushed back on committing one way or another on running for a second term.During his first interview after announcing his presidential run on ABC’s The View, Biden said he wouldn’t commit to only one term and that making a determination on that was not necessarily his choice.“I may end up, if I get elected, only having one term, but the idea of committing not to do one term. Look, I, here’s the deal: I think it’s important for people, it’s a legitimate question to ask about my age, and the dame question was asked of me at age 29, whether I was old enough to serve. It’s a question of whether or not, hopefully, I can demonstrate, not only with age comes wisdom, and experience that can make things a lot better. And look, that’s for you all to decide,” Biden said on the topic.Copyright © 2019, ABC Audio. All rights reserved.