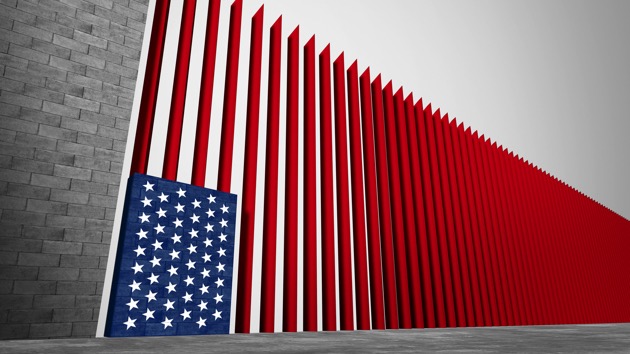 wildpixel/iStock(WASHINGTON) — A federal judge has issued a nationwide block on the Trump administration’s use of $3.6 billion military construction funds to build a wall along the border of the United States and Mexico, declaring that repurposing those funds would be “unlawful.”The decision came after the government of El Paso County, Texas filed a lawsuit on Tuesday to stop the wall, arguing that the construction caused irreparable damage to their community. The ruling said the plaintiffs had indeed demonstrated “irreparable harm” and that the “balance of the equities and public interest weigh in their favor.”“It’s a great victory for Congress’s constitutional power of the purse, and a reminder that presidents are NOT kings,” Democratic Rep. Lucille Roybal-Allard of California said in a response on Twitter.

BREAKING: A judge has blocked President Trump's attempt to spend crucial military construction funds on his ineffective border wall. It's a great victory for Congress's constitutional power of the purse, and a reminder that presidents are NOT kings. https://t.co/0O7lUs7W8P

The injunction blocks funding planned for as much as 175 miles for an “emergency border wall system” in Texas, Arizona and California — disrupting the administration’s plans to complete 450 miles of new barriers by the end of 2020.Since President Donald Trump took office, the administration has built just over 86 miles of new barriers. Most of that work has been renovating and replacing out-dated designs, according to Customs and Border Protection.Federal authorities have not completed any new barriers along empty stretches of border, although construction is under way in the Rio Grande Valley.Last July, the Supreme Court handed Trump a big win on the issue by greenlighting $2.5 billion to be used for military counterdrug funding for the border wall temporarily — a signal that it would ultimately side with the administration on the issue of shifting money around for what Trump says is a “national emergency.”The judge in the latest ruling — District Court Judge David Briones with the United States District Court for the Western District of Texas — insists that his decision doesn’t conflict with the Supreme Court decision, because his case focused on military construction funds, not counterdrug money.“The president’s emergency proclamation was a blatant attempt to grab power from Congress,” said Kristy Parker, a lawyer for Protect Democracy, an advocacy group that provided legal representation in the case. “This is a huge win for democracy and the rule of law,” Parker added.With an appeal from government lawyers, the case likely goes to the Supreme Court — a path where it could linger while lawmakers head into a new fight over government funding in the coming weeks. Copyright © 2019, ABC Audio. All rights reserved.