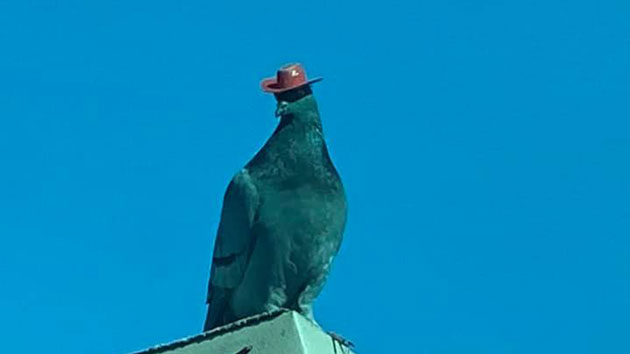 Bobby Lee/Facebook(LAS VEGAS) — Pigeons wearing cowboy hats have been spotted roaming Las Vegas and the viral videos of the well-dressed birds have the internet talking — and at least one local charity trying to save them.A video of two pigeons in the tiny hats first surfaced last Thursday when a Las Vegas resident named Bobby Lee saw them on the street and was able to film them walking around.The video quickly went viral and, not long after, other people began spotting the cowboy pigeons around town and capturing them on video as well.While the birds — dubbed Cluck Norris and Coolamity Jane — have sparked a lot of laughter, they have also sparked a lot of questions and concerns for the birds’ well-being.

— ???? ♥??‍♀️ (@kassandraqueenn) December 9, 2019 A local bird-rescue charity called Lofty Hopes has been chronicling efforts to track and trap the birds so they can remove the hats.“Lofty Hopes located Cluck Norris today. We are attempting to trap him to remove the hat from his head. It’s obviously glue because it has stayed on for several days now and there are loose feathers caught in the glue between the hat and his head,” Lofty Hopes said in a Facebook statement. “You can see in the video that the hat is bothering him and he wants it off.”The group initially asked the public to feed the birds if they found them and to contact them immediately, but after several close calls in trying to trap the birds they still haven’t been successful.The charity has even put a wanted poster out for the capture of the animals.But almost a week after the birds were first spotted donning the cowboy hats, perhaps the two biggest questions remain unanswered — who did this and why?“Cluck Norris is [as] elusive as a pigeon can be,” said Lofty Hopes. “Today we chased him to new rooftops, tried to trap him, and sat quietly on the ground with him. He is not food motivated so it’s hard to capture him and get him the help he needs. If you see these birds in hats in Vegas, please do NOT feed them. We previously asked people to call us and feed them until we arrived, but now we have a trap set. In order for the trap to work, he must be hungry.”Copyright © 2019, ABC Audio. All rights reserved.