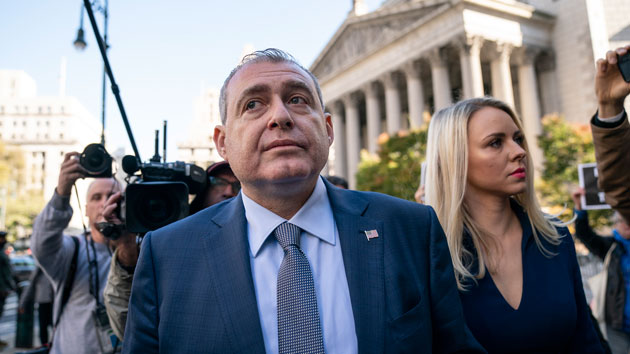 Drew Angerer/Getty Images(NEW YORK) — Federal prosecutors in New York have asked a judge to revoke bail for Rudy Giuliani-associate Lev Parnas”There is no set of conditions that will reasonably ensure his appearance and compliance with the terms of his release,” prosecutors said.Parnas is accused of making false statements to pretrial services regarding his assets and income.Prosecutors also said he represents an extreme risk of flight, compounded by “continuing and troublesome misrepresentations to pretrial services.In their filing Wednesday night, prosecutors say, “Parnas failed to disclose … the fact that in September 2019, he received $1 million from a bank account in Russia.”An attorney for Parnas told ABC News he is “reviewing” the filing from the Southern District.”We will file a written response in the coming days,” Parnas’ lawyer, Joseph A. Bondy, told ABC News. “We look forward to a hearing next week in court.”Parnas was arrested on Oct. 9, along with associate Igor Fruman, and charged with four counts, including conspiracy to commit campaign finance fraud, false statements to the Federal Election Commission, and falsification of records.They have pleaded not guilty.According to the original indictment, Parnas sought then-Ukrainian Ambassador Marie Yovanovitch’s ouster earlier this year along with his efforts to get Ukrainian officials to investigate the president’s political rival, matters that have repeatedly emerged in the House impeachment inquiry.As ABC News has previously reported, Giuliani’s relationship with Parnas and Fruman is the subject of a criminal investigation in the Southern District of New York, according to sources familiar with the matter. Copyright © 2019, ABC Audio. All rights reserved.