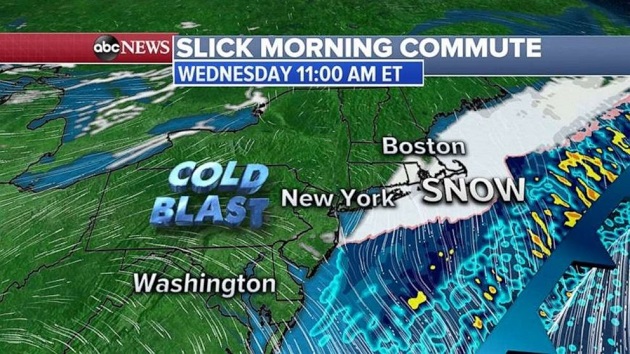 ABC News(NEW YORK) — An Arctic cold front moved through the South Tuesday, dropping temperatures down near 40 degrees. A record high of 81 degrees was reported in Mobile, Alabama, Tuesday — and on Wednesday morning, temperatures there are in the 40s.As the cold front moved through, rain changed to snow from Arkansas to Northern Mississippi, into Alabama and most of Tennessee, where a dusting to an inch of snow was reported.The cold front is now pushing east, and has reached the East Coast Wednesday morning. Rain has changed to snow from Philadelphia into New York City and Boston, with some snow accumulation in the Northeast.A winter weather advisory has been issued from New Jersey to Massachusetts due to this snow Wednesday morning.By later Wednesday morning, the snow will be gone for the most part with maybe a few snow showers near Boston and Cape Cod, Massachusetts. The most snow will fall in eastern New England and eastern Long Island, where 1 to 4 inches of snow could accumulate.Behind the cold front and the snow we have Arctic air, with wind chills Wednesday morning dangerously low at -20 to -35 degrees — cold enough to produce frost bite in 10 to 30 minutes on any exposed skin.Some of the coldest air moves into the Northeast Wednesday night into Thursday morning, with Midwest temperatures dropping into the single digits down to below zero. Even the South will be very chilly, feeling like it’s in the 20s in Atlanta and Charleston, South Carolina.