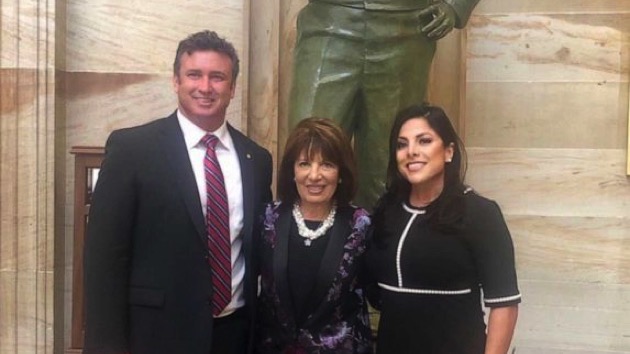 Army Sgt. Richard Stayskal, Rep. Jackie Speier and attorney Natalie Khawam pose for a photo together. Army Sgt. Richard Stayskal, Rep. Jackie Speier and attorney Natalie Khawam pose for a photo together.- (Courtesy Natalie Khawam)(WASHINGTON) — For the past year, Sgt. 1st Class Richard Stayskal has been fighting for justice.While battling terminal stage 4 cancer — which he said stemmed from military doctors failing to tell him about a tumor in his lung — he has also been working with lawmakers to ensure that his family and other members of the military get the compensation they deserve for alleged medical malpractice.Active-duty members of the military have not been able to make a claim against the government for nearly 70 years under the Feres doctrine, based on a controversial 1950 Supreme Court decision, but this week Stayskal appears to have achieved a victory in his efforts to change that.New legislation, which was agreed upon by Congress and which made it into the National Defense Authorization Act (NDAA), will allow for members of the country’s armed forces to file a claim against the U.S. and receive compensation if they were subjected to “negligent or wrongful” medical treatment at a military facility, according to a portion of the NDAA.”It’s kind of a little surreal,” Stayskal, a 38-year-old father of two from Pinehurst, N.C., told ABC News in a telephone interview.He said that even though the amendment doesn’t upend Feres entirely, it’s a start for military members and their families.”There’s no way you were gonna ask for the entire thing overhauled,” Stayskal said. “We took the very narrow approach and said, ‘Where can we start?"””And it seems to be working so far,” he added.Feres has long been deemed a failure of the Supreme Court, even among its justices.In 1978, the late Justice Antonin Scalia wrote that “Feres was wrongly decided and heartily deserves the ‘widespread, almost universal criticism’ it has received,” according to the Center for Justice Democracy at New York Law School.Rep. Jackie Speier, D-Calif., who introduced the new legislation, called it a “breathtaking win” and “historic victory.””[The legislation] is going to be able to provide some level of appropriate compensation” for service members who have been the victim of medical malpractice, she told ABC News.There is no cap for how much a service member can be compensated and the government allotted $400 million over 10 years, Speier said. Family members can file a claim if their loved one has died as a result of the medical malpractice.While bills have been introduced over the years in an effort to overturn the doctrine, it was not until Monday when the final NDAA was released and the amendment was included that real change had been made.The new provisions within the NDAA are expected to go into effect once the act is passed by the Senate and signed by President Donald Trump, which is expected by the end of December, according to Speier’s office.Speier said that while the provision will be beneficial for all military members, it was Stayskal she had in mind most during the fight.”Sgt. Stayskal’s daughters are 11 and 9, so imagine the long term benefits that will accrue now because there will be compensation for his loved ones,” she said.Stayskal began meeting with members of Congress, including Speier, after a failed attempt to sue the Department of Defense for medical malpractice over claims that doctors failed to tell him about a tumor growing in his lungs.In January 2017, Stayskal had gone to the military-operated Womack Army Medical Center in Fort Bragg to be medically cleared for a diving course, according to him and his attorney, Natalie Khawam.Despite doctors noticing a tumor, first in the initial appointment and once again four months later when he was rushed to the ER because of chest pains, they said nothing, Stayskal and Khawam told ABC.Instead, Stayskal was told on the second visit that he had a type of pneumonia, according to Khawam.Stayskal, who served for 14 years and was a member of the elite Green Berets, has since been diagnosed with stage 4 terminal cancer, his lawyer said.The Department of Defense did not respond to ABC News’ request for comment. A spokesperson at Womack said in a statement to ABC News that the medical center could not comment on specifics regarding cases, but “we are required to identify, analyze, appropriately report unanticipated outcomes, and take the requisite corrective actions. This process reduces risk to patients and improves the quality of care.””Womack AMC takes seriously its commitment to ensure the highest quality of care as part of the Military Health System, and supports to SFC Stayskal in his ongoing medical treatment,” the statement read.Khawam said since representing Stayskal, she has heard from numerous other military members claiming to have suffered from similar treatment.For them, she’s grateful that the legislation made it into the final NDAA.”I think that everybody deserves a right to have their day in court or be heard and accountability is such an important aspect that everyone’s overlooking for our military,” Khawam told ABC News.”It’s not a Democratic thing. It’s not a Republican thing,” she added. “It’s an American thing.”Copyright © 2019, ABC Audio. All rights reserved.