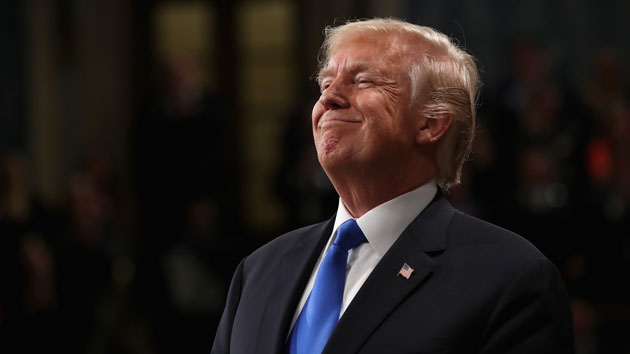 Win McNamee/Getty Images(WASHINGTON) — Just hours after House Democrats announced two articles of impeachment against President Donald Trump, he held a massive rally in the crucial key battleground state of Pennsylvania Tuesday night, where his reelection campaign spoke confidently that inquiry is only boosting their 2020 prospects.

“It has been a motivating factor for the president’s supporters,” Tim Murtaugh, the Trump campaign’s communications director, told ABC News Political Director Rick Klein on the Powerhouse Politics podcast on Wednesday. “The engagement with our voters, the donations that come rolling in online … every time something like this happens, you’ve seen the president’s campaign gets bigger and stronger and we raise more money.”

And in the 72 hours after House Speaker Nancy Pelosi initially made the impeachment inquiry announcement in September, the campaign said it raised $15 million in small-dollar donations, including 50,000 new donors.”In the end, no president wants to be impeached. Let’s make that clear. Nobody, nobody wants to be impeached,” Murtaugh told Klein. “But the end result will be it’s going to rebound and be detrimental for the Democrats who are running.”While the campaign touts fundraising numbers as proof the impeachment probe will be a win for the president in next year’s election, polling suggests months into House Democrats’ inquiry that large swaths of the American people still believe he should be removed from office.In a new Monmouth University poll, 45% say that Trump should be impeached and compelled to leave office while 50% say he should not be impeached and compelled to leave office.And when asked how impeachment could impact the Trump campaign’s prospects of expanding their map in 2020, Murtaugh told Klein he’s confident not only will the president retain the 306 electoral college votes from 2016, but pick up new states along the way.”We believe our floor is 306 electoral college votes,” Murtaugh said, adding that the campaign sees Trump ahead in all the key states they monitor internally.Murtaugh also told Klein that heading into next year, when Democrats start voting in primaries and there’s a potential Senate impeachment trial, the campaign will remain focused on capitalizing on the “lifeblood” of Trump’s reelection effort: rallies.”We don’t base our decisions on what we’re going to do running the president’s reelection campaign based on all the Democrats in Washington,” Murtaugh said. “[The House Democrats’] articles of impeachment today and we have a rally in Hershey, Pennsylvania. That’s their business.”He added, “We’re running our own campaign.”Powerhouse Politics podcast is a weekly program that posts every Wednesday, and includes headliner interviews and in-depth looks at the people and events shaping U.S. politics. Powerhouse Politics podcast is hosted by ABC News Chief White House Correspondent Jonathan Karl and ABC News Political Director Rick Klein.Copyright © 2019, ABC Audio. All rights reserved.