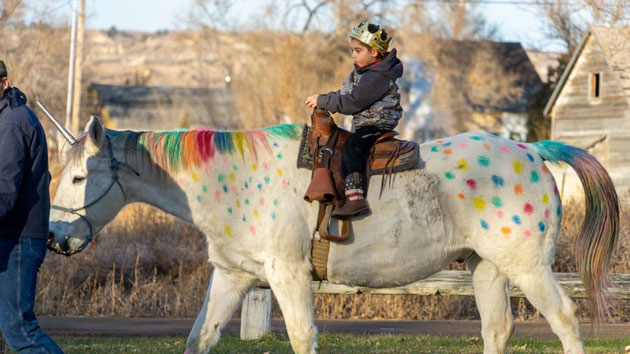 Jennifer Nielsen(MEMPHIS, Tenn.) — A boy who loves unicorns met two in real life thanks to a send-off party from his kindergarten classmates.Wyatt Haas was diagnosed with brain cancer on Nov. 15. On Dec. 6, his community held a farewell party at the neighborhood park before he headed to St. Jude’s in Memphis, Tenn., to undergo treatment.”I don’t think he expected to see a unicorn at the park,” dad Zach Haas of Fallon, Montana, told “Good Morning America.” “I think he just expected to see friends. He was super excited.”Wyatt had surgery on Nov. 16 to remove part of a tumor. Haas said his 5-year-old son had been sick and having headaches before doctors revealed what was wrong.”The last couple months he’s been in so much discomfort,” Haas noted. “He hasn’t been laughing, playing … having fun.””I think after the surgery he was being himself again.”Jennifer Nielsen, a mom whose son is in Wyatt’s kindergarten class at Terry Elementary School, said she helped organize the “unicorn” ride for Wyatt.Nielsen and her husband, Will, run Nielsen’s Ranch and offered to dress their horse named Bonanza like a unicorn for Wyatt. Lily, a friend’s pony, was also made up as the mythical creature.To transform Bonanza and Lily, Nielsen used washable animal chalk that ranchers use to identify livestock. It’s temporary and safe on animals, she said. Unicorn horns were created from paper towel rolls.”We’re really a small community,” Nielsen told “Good Morning America.” “It was a really beautiful thing to rally around Wyatt and his family — let them know we’re praying … we love Wyatt and wanted to show our support.”Wyatt’s friends posed in photos with him and shared unicorn cake.Wyatt and his mom, Corissa, are now in Memphis where he will receive radiation and chemotherapy.You can follow Wyatt and his journey on his Facebook page. Copyright © 2019, ABC Audio. All rights reserved.