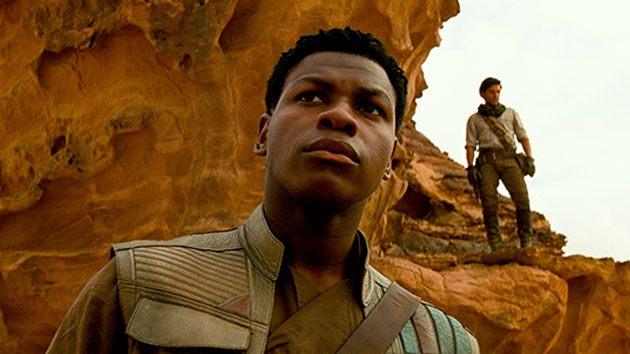 L-R: John Boyega and Oscar Isaac in “Star Wars: The Rise of Skywalker”; Lucasfilm/Disney(LOS ANGELES) — While Star Wars is one of the biggest fandoms in pop culture, it also can be the most divided.  For example, fans either loved or completely despised Marie Tran’s character, Rose, in The Last Jedi.

Tran was famously bullied off Instagram by angry fans after the film hit theaters.

In an interview with Variety, John Boyega didn’t hold back on how he feels about all the intense debates raging within the Star Wars community. He called those who intentionally bring their negativity into the fandom, as they did with Tran, as “not mentally strong.”

“You are weak to believe in every single thing that you read. That’s, you know, it is what it is. I don’t know, for me anyway, when I see that [backlash], I’m like, well, that’s actually not true,” He stated before he was asked about another majorly divisive part in the Star Wars community: shipping, or, which character fans want to see become romantically involved.

When asked about all the characters Boyega’s Finn is shipped with, he huffed, “What I don’t like is the conflict between ‘ships. I think it’s the most stupid thing in the world. This is “Star Wars.” It’s a big universe.”  He adds, “Let’s all have fun! The conflict is when I’m like, all right, ‘Let’s all calm down."”

Boyega also joked that the fandom is called Star Wars and not “Tribal Wars.”

John will make his next and perhaps final appearance as Finn in The Rise of Skywalker when it arrives in theaters December 20.  The film also stars Daisy Ridley, Oscar Isaac, Adam Driver, Tran, and a posthumous Carrie Fisher.

Lucasfilm is owned by Disney, the parent company of ABC.