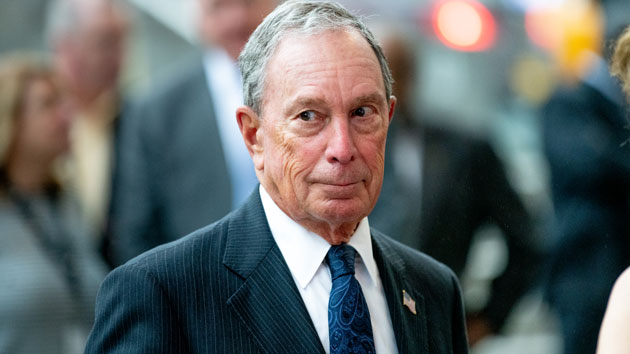 Roy Rochlin/Getty Images(NEW YORK) — Before he was mayor of New York City, in the midst of his first foray into politics, Mike Bloomberg had a heart procedure — a fact he immediately reported to the Federal Aviation Administration so he could keep flying airplanes.On Thursday, Dr. Stephen D. Sisson of the Johns Hopkins University School of Medicine described the 77-year-old billionaire as “in outstanding health” and “great physical shape.””He exercises several times a week and plays golf avidly,” Dr. Sisson wrote. “There are no medical concerns, present or looming, that would prevent him from serving as President of the United States.”Bloomberg had two stents implanted in a blocked artery in 2000, according to Sisson’s letter.The letter released by Sisson in concert with Bloomberg’s campaign details that since the stents were placed, he’s endured normal cardiac stress testing. Bloomberg’s latest annual examination was in July.About 434,000 Americans receive stents every year, according to the American Heart Association. Stents hold open arteries to clear blockages or improve blood flow. It’s the same procedure Bernie Sanders had in October.In 2018, Bloomberg developed atrial fibrillation, for which he now takes a blood thinner. He also takes a beta-blocker and medication to help control his cholesterol.Bloomberg also has had small skin cancers removed and is under treatment for arthritis and heartburn, both of which, Sisson said, are “well controlled.”According to Sisson’s report, Bloomberg is 5 feet, 7 inches tall and weighs 165 pounds. His blood pressure was within an expected range for a man his age.The doctor’s letter also mentioned that Bloomberg has an active pilot’s license. In 2000, immediately after receiving his stents, Bloomberg notified the FAA, according to the candidate’s campaign.Sisson’s letter also mentioned Bloomberg is a non-smoker without a history of substance-use disorder, and that his dietary and exercise habits are excellent — calling to mind several decisions he made as New York City mayor, such as cracking down on public smoking and the consumption of sugary drinks.Ultimately, as the Democrat continues on a strenuous, uphill trail toward the White House, his doctor declared him to be in “outstanding health.” Copyright © 2019, ABC Audio. All rights reserved.