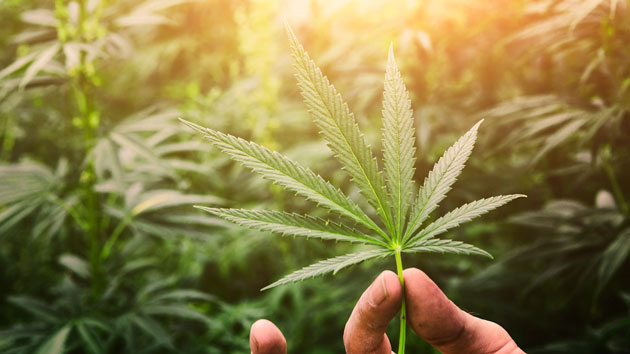 iStock(NEW YORK) — MLB has become the first major American sports league to remove marijuana from its list of drugs abuse.The league, in association with its players union, announced the changes to its Joint Drug Program on Thursday morning. The drug will still be tested for and could result in punishment similar to its alcohol and violence policies.”Natural cannabinoids (e.g., THC, CBD, and Marijuana) will be removed from the Program’s list of Drugs of Abuse,” MLB said in its release. “Going forward, marijuana-related conduct will be treated the same as alcohol-related conduct under the Parties’ Joint Treatment Program for Alcohol-Related and Off-Field Violent Conduct, which provides mandatory evaluation, voluntary treatment and the possibility of discipline by a Player’s Club or the Commissioner’s Office in response to certain conduct involving Natural Cannabinoids.”The changes go into effect when spring training begins in 2020.Many players in other professional leagues have campaigned for similar changes in their sport. The NFL announced in May it would be working with the players association to create a Joint Pain Management Committee that would “conduct research concerning pain management and alternative therapies.”Among those alternative therapies, the NFL said, are cannabis, cannabinoids and CBD.MLB also overhauled several other aspects of its drug policy — some targeted at preventing the tragedy that befell Los Angeles Angels of Anaheim pitcher Tyler Skaggs in August. The 27-year-old was found dead in his hotel room in Texas while on a road trip. His cause of death was later determined to be due to a mix of fentanyl, oxycodone and alcohol in his system.On Thursday, the league announced it will begin testing players for the presence of opioids, fentanyl, cocaine and synthetic THC. Players will not be suspended, however, unless they do not work with the league on a treatment plan.”Any player who tests positive for one of these Drugs of Abuse will be referred to the Parties’ Joint Treatment Board (composed of medical professionals specializing in substance abuse and representatives from the Office of the Commissioner and the Players Association) for an initial evaluation and, if appropriate, formulation of a personalized treatment plan for that Players going forward,” the league said. “Only Players who fail to cooperate with their initial evaluation or prescribed treatment plan may be subject to discipline.”All players and team personnel will also be required to attend programs outlining the dangers of using opioids for pain management during the 2020 and 2021 seasons, the league announced.”Players are overwhelmingly in favor of expanding our drug-testing regimen to include opioids, and want to take a leadership role in helping to resolve this national epidemic,” Tony Clark, executive director of the MLBPA, said in a statement.Copyright © 2019, ABC Audio. All rights reserved.