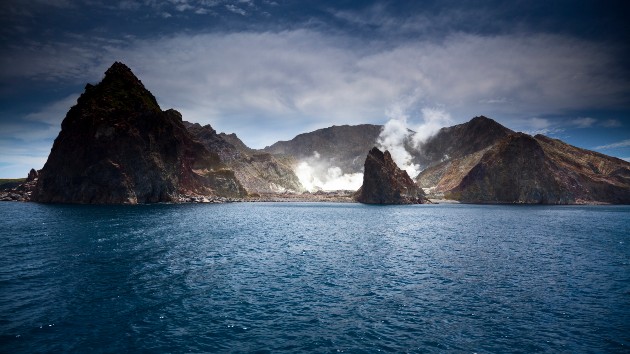 dan_prat/iStock(LONDON) — New Zealand authorities said they’ve recovered the bodies of six tourists who were stranded on White Island, where a volcano erupted earlier this week.”Six bodies have been prepared for air lifting off Whakaari / #WhiteIsland and the process to transport them to HMNZS Wellington by helicopter has begun,” New Zealand Police said in a tweet Friday, local time.Authorities began the dangerous task of retrieving the bodies at first light Friday morning. The major operation included helicopters and boats as others searched at ground level.Investigators had previously announced that plan was contingent on risk factors beyond their control, including weather and the conditions on the volcanic island.Through aerial reconnaissance flights over the island, authorities discovered the location of six bodies but said there may be at least two more.”A lot has to go right for us tomorrow to make this work,” New Zealand Police Deputy Commissioner Mike Clement said in a statement Thursday. “There is no zero-risk option in regard to the plan, but we have carefully considered it. We don’t expect the risk to change tonight or tomorrow, but we have planned for it.”White Island, also known as Whakaari, is about 30 miles from the country’s mainland and home to New Zealand’s most-active cone volcano. The uninhabited island has had regular eruptions for years but has become a widely popular tourist destination, accessible only by boat and helicopter.Risk assessment maps released Thursday by New Zealand’s geoscience agency, GNS Science, show the crater floor of White Island remains a high-risk area, with another eruption increasingly likely. The information has been provided to the New Zealand Police to support their decision-making.”Whakaari/White Island is an active volcano, and the estimated chance of an eruption is increasing every day,” GNS science volcanologist Graham Leonard said in a statement. “Today is less safe than yesterday, and the day before that.”A total of 47 people, including at least nine Americans, were visiting the island when it suddenly spewed scalding steam, ash and rock into the air Monday afternoon. Thirty-four people were evacuated via helicopters that and taken to hospitals for injuries, according to the New Zealand Police, which said there are likely no survivors left on the island.Rescue workers hadn’t been able to return to the island since then because the conditions have been too dangerous and unpredictable.”This level of volcanic activity is the highest we’ve seen since the eruption in 2016,” Leonard said.At least eight people have died from their injuries since being rescued.Among the dead are two teenage brothers, Matthew and Ben Hollander, who were born in the United States and moved to Australia from the Chicago area six years ago. The boys’ parents, Martin and Barbara Hollander, are still missing, according to Knox Grammar School in Sydney, Australia, which the boys attended and is acting as a liaison for their family.Another 29 people suffering burns over at least 30% of their bodies were still receiving treatment at various hospitals in the country as of Wednesday. Twenty-two of the patients remain on breathing support due to the severity of their burns and other injuries — some were burned over 90% of their bodies, according to Dr. Peter Watson, chief medical officer of the Counties Manukau District Health Board.”The majority [of patients] are very severe,” Watson told reporters at a press conference Wednesday. “Our surgical teams have been working around the clock.”The nature of the burns is complicated by the gases and chemicals from the volcanic eruption, requiring more rapid surgical treatment than would be the case for thermal-only burns, according to Watson.Watson said doctors require an estimated 1.2 million square centimeters of skin grafts to continue treating the burn victims.An order has been placed with the United States for the additional skin as well as more wound dressings, according to Watson. The skin is the human body’s largest organ, averaging a surface area of about 22 square feet.Authorities are still working to confirm the identities of the deceased as well as the injured. New Zealand police have launched an investigation into the circumstances of the deaths and injuries on White Island.Those who cannot get in touch with a friend or family member in the wake of the eruptions are urged to register them by visiting the New Zealand Red Cross website, or they can contact the New Zealand Police.