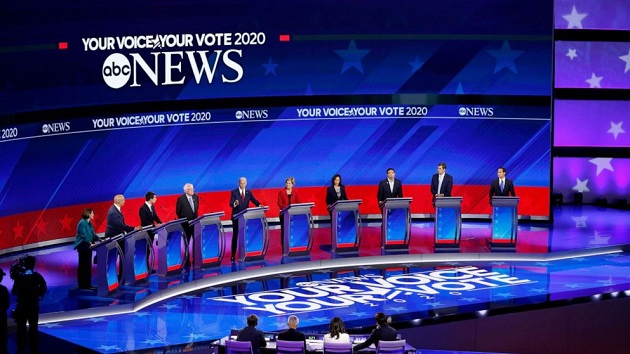 Heidi Gutman/Walt Disney Television(WASHINGTON) — Democrats will kick off 2020 with four Democratic primary debates in Iowa, New Hampshire, Nevada and South Carolina, the Democratic National Committee announced Thursday. The debates will take place in January and February.ABC News, in partnership with ABC’s New Hampshire affiliate WMUR-TV and Apple News, will hold the first debate after voting begins on Friday, Feb. 7, at St. Anselm College in Manchester. The early February face-off will mark the only debate this election cycle in New Hampshire, which hosts the country’s first primary on Feb. 11.CNN and The Des Moines Register will host a debate on Jan. 14 at Drake University ahead of Iowa’s caucuses. NBC News and MSNBC, in partnership with The Nevada Independent, hosts a Feb. 19 debate in Las Vegas prior to Nevada’s caucuses. CBS News and the Congressional Black Caucus Institute co-host the debate before South Carolina’s primary on Feb. 25 at The Gaillard Center in Charleston, South Carolina and Twitter will be a debate partner.Five Democratic senators are currently running for president and have indicated they will return to Washington for an impeachment trial in the Senate should one take place.With the possibility that the timing of the first 2020 debate could conflict with an impeachment trial in the Senate, Xochitl Hinojosa, communications director for the DNC, said, “If a conflict with an impeachment trial is unavoidable, the DNC will evaluate its options and work with all the candidates to accommodate them.”The newly announced debates will be held over a pivotal stretch of January and February, when voters are likely to winnow the field through the first four contests. After that comes Super Tuesday, when more than one-third of total convention delegates available to candidates will be awarded.In 2008, there were four debates in January, after the Iowa caucuses were held on Jan. 3 of that year, and a fifth debate on Feb. 2.Last week, California Sen. Kamala Harris, Montana Gov. Steve Bullock and former Pennsylvania Rep. Joe Sestak ended their presidential bids shortly after the last-minute entrances of former Massachusetts Gov. Deval Patrick and billionaire philanthropist and former New York City Mayor Michael Bloomberg.The New Hampshire debate will air across ABC, WMUR-TV, which is owned by Hearst Television, Apple News and on ABC News Live, ABC’s streaming channel available on the ABC News site, app and OTT media services.The DNC will release more details, including the qualifying rules, for the early 2020 debates at a later date. In 2019, the party imposed more rigorous qualifying rules as the primary season deepened — oftentimes putting the committee at odds with the presidential contenders leading to lower-polling candidates being excluded from the stages.This is the second debate hosted by ABC News following September’s matchup at Texas Southern University, a public, historically black university in Houston, which was co-hosted with Univision. That debate featured a roster of 10 candidates, with former Vice President Joe Biden and Massachusetts Sen. Elizabeth Warren, the two polling front-runners at that point in the primary, tangling on the same stage for the first time. They have since stood shoulder-to-shoulder at center-stage in every matchup succeeding that debate.Copyright © 2019, ABC Audio. All rights reserved.