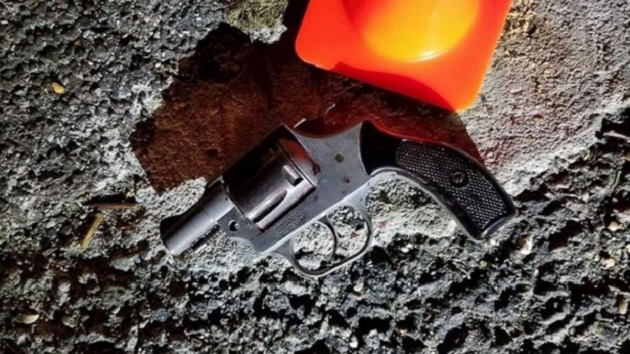 New York City Police Department(NEW YORK) — The NYPD has released body camera footage from officers involved in a pursuit and deadly shooting that left a fellow officer and a suspect dead.The video, released Friday, shows police officer Brian Mulkeen and other plainclothes officers on patrol in the Bronx on Sept. 29, 2019. The footage shows him and officer Robert Wichers get out of an unmarked vehicle and approach two suspects.The officers were patrolling the neighborhood after a shootout there earlier that week, police said.One of the suspects, Antonio Williams, immediately flees and leads Mulkeen and Wichers on a foot chase, according to Wichers’ body camera.The other suspect, who was not named, did not run and was pat down by officer Brian Mahon who called for back up, his body camera video shows.Wichers catches up to Williams, shoves him to the ground and struggles with him, the video shows.”He’s reaching! He’s f—— reaching! He’s reaching!” one of the officers is heard saying, according to Wichers’ body camera.Wichers is seen punching Williams before three more officers arrived on the scene. Wichers separates from Williams and, along with the other officers, opens fire.In total, there 15 bullets were fired by all six officers, said Kevin Maloney, deputy chief of the Force Investigation Division, who narrated a 13-minute NYPD video detailing the shooting.Mulkeen was struck by one of his fellow officers’ bullets, the NYPD determined. He died at a local hospital.Williams, who was armed with a pistol, was shot and killed, too, police said. His gun was not fired, the NYPD determined.The other suspect was detained for a parole violation and later released.Maloney said investigators from the division the Bronx District Attorney’s office will continue to interview witnesses and review more footage as part of the investigation.”After the investigation is complete, the facts of this case will be presented to the First Deputy Commissioner’s use of force review board, where the evidence will be evaluated to determine if the force applied in this case was justified and consistent with department guidelines,” he said in the video.Justin Williams, Antonio Williams’ brother, however, said the video didn’t appear to show the plainclothes officers identify themselves as police. He said in a press statement released by the family that relatives saw the video and felt “sadness, anger and questions.””I saw and heard my brother being punched and beaten by officers before he was killed,” he said.He added that the NYPD’s “hyper-aggressiveness policing and recklessness murdered my brother Antonio and the officer.”The NYPD did not immediately respond to ABC News’ request for comment Saturday. Copyright © 2019, ABC Audio. All rights reserved.