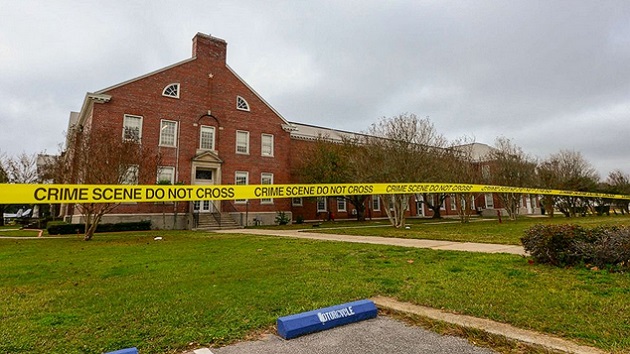 FBI(PENSACOLA, Fla.) — New details have emerged in the deadly shooting at a Florida naval base, including a cryptic message that the suspect wrote just months before the attack, according to a federal report obtained by ABC News.Mohammed Alshamrani, 21, a second lieutenant in the Saudi Air Force who authorities say killed three people and injured eight others after opening fire at the Naval Air Base Pensacola last week, wrote the phrase “the countdown has started” on Sept. 11, 2019 with no further explanation, according to a Joint Intelligence Bulletin released Friday.The post was written about four months before the Dec. 6 shooting, according to the report.The bulletin, which was issued by the FBI, Department of Homeland Security, National Counterterrorism Center and the Defense Intelligence Agency, also stated that his social media included references to non-Muslims as “infidels” and defended jihad.Sources previously told ABC News that investigators determined the shooting was likely a “terror” attack inspired by radical Islamic ideology.One post contained writings that were consistent with a 2010 statement from American-born cleric Anwar al Awlaki, who was killed in 2011 in a CIA-led drone strike, according to the report.”I’m against evil, and America as a whole has turned into a nation of evil,” the post read, according to the report. “What I see from America is the supporting of Israel which is invasion of Muslim countries, I see invasion of many countries by its troops, I see Guantanamo Bay. I see cruise missiles, cluster bombs and UAV.”The multi-agency report also detailed new information about what happened inside the classroom where the shooting took place.The attack lasted about 15 minutes, during which time Alshamrani unloaded 180 rounds of his ammo and fired directly at pictures of President Donald Trump and a former president, who was not named, according to the report.Alshamrani purchased a Glock 9 mm pistol legally by taking advantage of a federal gun law exception that allows foreign nationals to purchase weapons — which is normally prohibited — for hunting, authorities have said.A witness told investigators that during the attack, Alshamrani made statements that were critical of U.S. military actions overseas, according to the report.Alshamrani, who was in the United States for flight training, was shot and killed by Escambia County Sheriff’s deputies at the scene.The report stresses that federal authorities are not aware of any ongoing specific, credible threats to the public.The FBI-Jacksonville, the lead investigative agency, said the investigation into the shooting remains active and they are working under the presumption “that this was an act of terrorism.””Our unified goal remains clear: to determine if the shooter acted alone or if anyone assisted, provided support for, or had knowledge of his attack in advance,” according to the FBI’s statement.The victims in the attack were identified as Ensign Joshua Watson, 23; Airman Mohammed Haitham, 19; and Airman Apprentice Cameron Walters, 21.The Navy posthumously advanced Haitham and Walters to Naval Aircrewman Mechanical 3rd Class on Saturday.”These sailors exhibited the finest warrior ethos and quick decision-making that undoubtedly saved many lives,” Acting Secretary of the Navy Thomas Modly said in a statement. “They took action when it was needed most, with the same skill and professionalism that they’d exhibited throughout their service to our nation.”Haitham and Walters had previously been proclaimed naval aircrewmen after they were awarded their Wings of Gold.