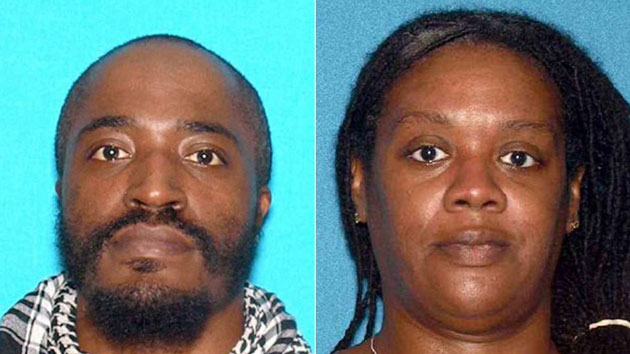 NJ Attorney General(JERSEY CITY, N.J.) — FBI considers New Jersey shooting a domestic terror caseThe FBI called the shooting at a kosher market in Jersey City a hate crime and an act of domestic terror as authorities confirmed a new video revealed more details about the suspects’ weapons.Seth Wenig/APA pawnshop owner has been arrested and an arsenal of weapons and ammunition seized after investigators found a note containing his phone number on the body of one of two domestic terrorist suspects who allegedly killed a New Jersey police detective before gunning down three others in a targeted attack on a Jewish market.The handwritten note found in the back pocket of terror suspect David Anderson contained the phone number and address of 35-year-old Ahmed A-Hady, a pawnshop owner and convicted felon, in Keyport, New Jersey, according to federal officials.A-Hady was arrested early Saturday at his pawnshop and residence and charged with one count of being a convicted felon in possession of a firearm, Craig Carpenito, U.S. attorney for the District of New Jersey, said in a statement.It remains unclear what A-Hady’s connection is to Anderson and his alleged accomplice, Francine Graham, 50.Authorities alleged that Anderson and Graham were armed with four guns, including an AR-15 rifle and a Mossberg 12-gauge shotgun, when they stormed the Jersey City Kosher Supermarket around 12:30 p.m. on Tuesday, killing 33-year-old Mindy Ferencz, 49-year-old Douglas Miguel Rodriguez and 24-year-old Moshe Deutsch.”They came to kill, and they didn’t come to spare anyone,” survivor David Lax, who ran out of the store and dodged bullets during the shooting, told ABC News.Anderson and Graham were killed in the store during an hours-long shootout with police.Just prior to launching the attack on the kosher market, Anderson and Graham allegedly shot to death Jersey City Police Det. Joseph Seals, a married father of five children, at a cemetery about a mile from the market, officials said.The suspects were also prime suspects in the slaying of Michael Rumberger, an Uber driver whose body was found on Dec. 7 in the trunk of a Town Car in Bayonne, New Jersey, about seven miles south of Jersey City, investigators said.The pair who were apparently homeless and living in a van, allegedly “held views that reflected hatred of the Jewish people as well as a hatred of law enforcement,” New Jersey Attorney General Gurbir S. Grewal said at a news conference last week.Carpenito said the motivation behind the attack on the Jewish market and the killing of Det. Seals “clearly appears to be a bias towards both the Jewish community and law enforcement.”The killings are being investigated by the Federal Bureau of Investigation (FBI) as a domestic terrorism event, Carpenito said.In addition to the AR-15 rifle and shotgun used in the kosher market attack, the suspects were armed with a 9mm Ruger semiautomatic handgun and a 9mm Glock 17, authorities said. Inside a stolen U-Haul van the suspects parked in front of the store, investigators seized a pipe bomb and a 22-caliber Ruger Mark IV handgun equipped with a homemade silencer and a homemade device to catch shell casings, Grewal said.Grewal said that based on two of the guns’ serial numbers, the Mossberg shotgun and the .22-caliber Ruger were legally purchased in 2018 by Graham at different gun shops in Ohio.Investigators are apparently looking to determine if A-Hady was involved in planning the attacks, or if he supplied some of the weapons Anderson and Graham used in the killing rampage.Carpenito said A-Hady was prohibited from possessing any firearms due to a 2012 felony conviction for attempting to obtain a controlled dangerous substance or analog by fraud. Details of the case were not immediately disclosed.During an interview with A-Hady and two of his relatives at his pawnshop on Friday evening, A-Hady allegedly admitted to FBI agents that he owned two handguns, .45-caliber and .44-caliber pistols, “but falsely denied that they were on the premises,” according to Carpenito’s statement.During the interview, one of A-Hady’s relatives tipped investigators off to a safe that contained A-Hady’s arsenal, Carpenito said.In a search of the safe, the pawnshop and A-Hady’s private residence, investigators seized 10 guns, including three AR-15 rifles, according to Carpenito. Investigators also seized over 400 rounds of ammunition, including a large number of hollow-point bullets, he said.A-Hady is scheduled to appear in federal court in Newark, New Jersey, on Monday morning.If convicted, he faces up to 10 years in prison and a $250,000 fine, officials said.Meanwhile, loved ones and friends packed a memorial service for Douglas Miguel Rodriguez on Saturday night at a funeral home in Patterson, New Jersey. Rodriguez is survived by a wife and daughter.When the shooting broke out at the Jersey City kosher store, Rodriguez, who immigrated to the United States from Ecuador, was fatally shot while helping a customer escape the carnage, relatives and officials said.”My husband was a good husband and a good father,” Rodriguez’s widow, Martha Friere Rodriguez, told reporters last week.Mindy Ferencz, the wife of the kosher market owner, and Moshe Deutsch, a Yeshiva student who was a customer in the store, were both buried in keeping with Jewish customs a day after they were killed.On Tuesday, law enforcement officers from across New Jersey and the country are expected to gather at Saint Aedan’s Church in Jersey City for the funeral of Det. Seals.”Joe is somebody who is involved in the city, who officers in other precincts knew … because he was a good cop,” Jersey City Mayor Steven Fulop said of Seals. “We cried with the family. It’s the hardest thing you ever have to see. No one expected Detective Seals not to return home. I’m sure his children expected him to return home.”Copyright © 2019, ABC Audio. All rights reserved.

What you need to know about critical minerals and climate change