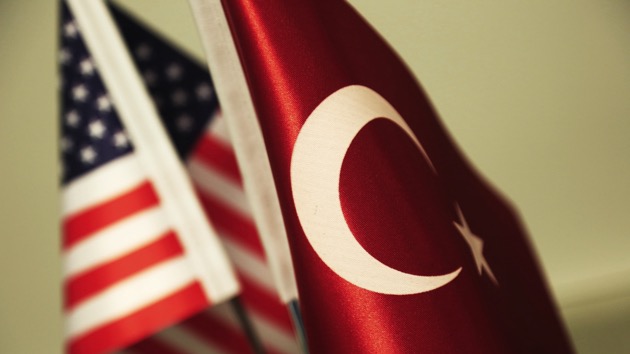 cenkertekin/iStock(BEIRUT) — Outraged by a resolution passed in the U.S. Senate labelling Ottoman-era ethnic cleansing of Armenians during WWI as an official genocide, Turkish President Recep Tayyip Erdogan is threatening to shut down two bases in Turkey where U.S. soldiers are stationed “if necessary”.”If necessary, we will hold discussions with all our delegations, and if necessary, we may close Incirlik [air base] and Kurecik [radar station],” Erdogan said in a televised interview on Sunday.Erdogan was reacting to last week’s unanimous Senate resolution acknowledging Armenian claims on the events that transpired in 1915.Historians estimate that up to 1.5 million Armenians were killed in a mass loss of life that many scholars regard as the 20th century’s first genocide. Turkey argues that the deaths of Armenians in eastern Anatolia took place after some of them sided with invading Russians and revolted against Ottoman forces, followed by a subsequent relocation of Armenians that resulted in numerous casualties.Threats to close American military facilities in Turkey, including the Incirlik air base, a key staging post for U.S. air operations against ISIS in Iraq and Syria, and the Kurecik base, a separate facility that hosts key U.S. Army radar used for NATO missile defense in Europe, have become a predictable hand that Turkey repeatedly plays.Last week, Turkey said it might kick the U.S. out of Incirlik and Kurecik ahead of moves by Congress to debate sanctions linked to Ankara’s invasion of Syria and its purchase of Russian weaponry, including hi-tech S-400 anti-aircraft missiles. Turkey’s Foreign Minister Mevlut Cavusoglu issued a similar warning in July.Despite President Trump’s repeated and enthusiastic support of Erdogan, these threats from Turkey are indicative of worsening relations between Washington and Ankara. Trump is in awe of Erdogan and openly compliments him and his combative ruling style, referring to him as “a tough guy who deserves respect,” calling him “a friend” and a “hell of a leader.” The Trump administration even gave Turkey a free hand to invade Syria by pulling all US troops away from the border areas. Under pressure of public opinion, Trump initially sanctioned Turkey for that military action, but then rescinded the penalty after a cease-fire agreement that left most of Turkey’s gains in place.For Ankara, its long-standing extradition request for U.S.-based Islamic cleric Fethullah Gulen, accused by Erdogan of orchestrating the 2016 failed coup, and U.S. charges against Turkey’s state-owned Halkbank for alleged Iran sanctions-busting are also contentious. Washington booted Turkey from its F-35 fighter jet program after Turkey bought the Russian missiles and Erdogan has repeatedly requested the United States cease support for Kurdish YPG militia.These explosive squabbles are driving a growing wedge between the two nations with the largest armies in the NATO partnership at a time when the Middle East in general is becoming increasingly volatile and more unpredictable. Russia is also angling to exert more influence in the region. During Erdogan’s recent high profile visit to the White House last month, he showed little appreciation for Trump’s effusive praise and did not hesitate to vocalize Turkey’s dissatisfaction with U.S. policy. There was little evidence that the meeting had been “wonderful and productive,” as Trump had declared. Copyright © 2019, ABC Audio. All rights reserved.