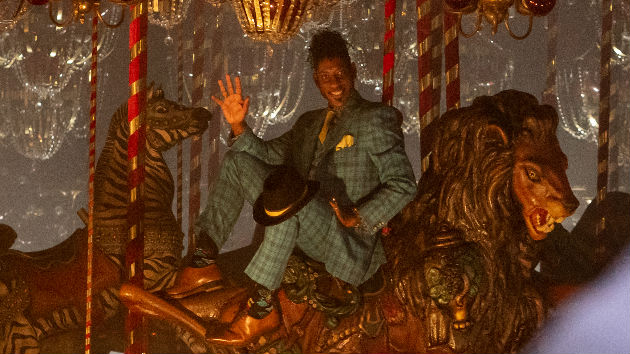 Starz(LOS ANGELES) —  (NOTE LANGUAGE) Orlando Jones has some choice words for the American Gods showrunner, Charles Eglee, whom he alleges had him fired from show for sending the “wrong message to black America.”

In a series of tweets and Instagram posts over the weekend, Jones, who played Mr. Nancy, aka the African trickster god Anansi, revealed he was fired from the hit Starz series in September.

“There will be no more Mr. Nancy.  Don’t let these motherf***ers tell you they love Mr. Nancy, they don’t,” he says in a video. “I’m not gonna name names but the new season-three showrunner is a Connecticut boy, Yale-educated, so he’s very smart, and he thinks Mr. Nancy’s angry, get s*** done is the wrong message for black America.”

Jones goes on: “That’s right, this white man sits in that decision-making chair and I’m sure he has many black BFFs who are his advisors and made it clear to him that if they did not get rid of that angry god, Mister Nancy, he’d start a Denmark Vesey uprising in this country.  I mean, what else could it be?”

Jones did go on to thank many people involved in America Gods’ production, including author Neil Gaiman, who wrote the book on which the series is based.

In a subsequent interview with Variety, Jones shared more details on his issues with the show, saying he went to Twitter after producers failed to release a statement that he wouldn’t be returning, explaining that he wanted this fans to know the truth.

“I was getting hundreds of messages from fans… ‘We can’t wait for Season 3,’ ‘We love Mr. Nancy,’…And to be honest with you, I cried,” Jones said. “I just sat and cried because I knew that I wasn’t going to be there.”

“And at some point I gotta say something,” he continued. “So I just repeated what they had said….And all what I was told was, ‘angry gets s**t done’ is the wrong message for black America, and that the new showrunner writes from a black male perspective.”

Jones also revealed he spoke with Gabrielle Union over the weekend about her recent firing, since Freemantle USA produces both America’s Got Talent and American Gods.  Union spoke out about what she claimed was a hostile, racially-insensitive workplace at AGT, which resulted in an ongoing SAG-AFTRA investigation and conversations with NBC.

Jones says his situation is very similar to Union’s.

“We said it to each other, almost at the same time, that this isn’t about money,” he said. “It’s about the people who are going to come behind us, who are going to find themselves in this same position.”

For their part, American Gods producers told Variety in a statement, in part, “Mr. Jones’ option was not picked up because Mr. Nancy, among other characters, is not featured in the portion of the book we are focusing on within season three.”