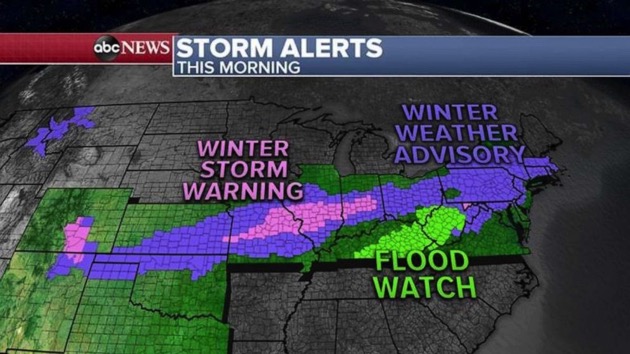 ABC News(NEW YORK) — A winter storm moving through the Rockies and the Plains over the weekend brought up to 43.5 inches of snow to Colorado and Wyoming, 11.5 inches to Kansas, 9 inches to Missouri and 6 inches to Illinois.Also with this storm, we saw freezing rain accumulating up to a quarter of an inch near Wichita with numerous accidents and spinouts reported in the Plains Sunday.Twenty states from Colorado to Maryland are under winter and flood alerts as this large storm system moves east.Monday morning, the center of the storm system is in the southern Plains but the freezing rain, snow and rain stretch from Colorado to Pennsylvania.Monday afternoon and evening, the storm system will move east and spread heavy snow from St. Louis to Indianapolis and freezing rain into West Virginia, Maryland and Pennsylvania.Further south, from New Orleans to Jackson, Mississippi, to Birmingham, Alabama, severe weather is expected with damaging winds, large hail and a few tornadoes.By Monday evening and into Monday night, snow and mixed precipitation will move into the I-95 corridor from Washington, D.C. to Boston. The worst of it, however, will miss the rush hour.On Tuesday morning, right during the morning rush, heavy rain is expected in New York City and Philadelphia but snow and icy weather is expected from Boston to upstate New York and into northern Pennsylvania with treacherous driving conditions are expected tomorrow morning in the Northeast.Storm snowfall totals will be the greatest in the Midwest from St. Louis to Indianapolis where more than 6 inches of snow is possible.In the Northeast, the heaviest snow will be from northern Pennsylvania to upstate New York and into parts of western Massachusetts where some areas could see 5 inches of snow.There could be a glaze of ice south of where the snow falls, from southern Pennsylvania into northern New Jersey, into the lower Hudson Valley and into Connecticut with very slick driving expected there Tuesday morning.