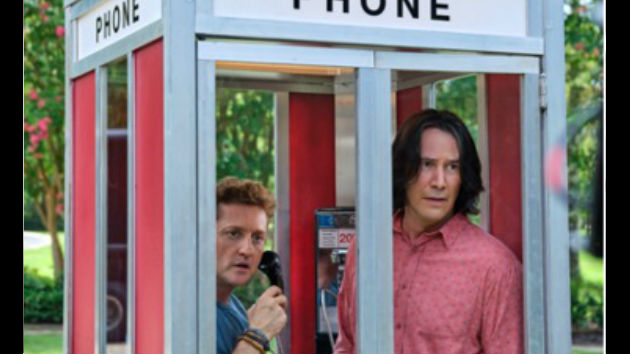 The pair appear concerned, peering out from the shelter of the series’ time-traveling phone booth, the phone cradled near Bill’s ear.

Another pic confirms that their old pal Death, played by William Sadler, is also along for the threequel.

As previously reported, Reeves, 54, and Winter, 53 are reprising their roles as Bill and Ted, who are now middle-aged dads who never quite fulfilled their destiny of writing a song that will save the universe.

This time, their daughters — Brigette Lundy-Paine’s Billie Logan and Samara Weaving’s Thea Preston — are along for the ride, with the fate of existence again in the balance.

Most excellent! ???? We have an exclusive first look at Keanu Reeves and Alex Winter in ‘Bill & Ted Face the Music.’ Click the link in our bio to see even more photos. ??: Patti Perret/Orion Pictures

A post shared by Entertainment Weekly (@entertainmentweekly) on Dec 17, 2019 at 7:18am PST