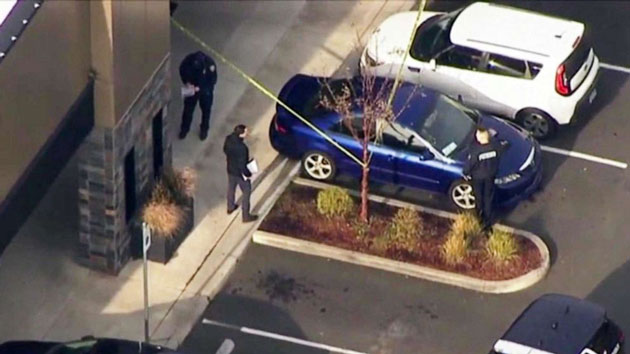 KATU(PORTLAND, Ore.) — One person was killed and three others were hurt in a stabbing at a shopping center near Portland, Oregon, Wednesday, according to authorities.The suspect stole a car before being apprehended, Beaverton police said.There “is no longer danger to the public,” said police.One witness told ABC Portland affiliate KATU that he was in his car when a man with a bloodied hand knocked on his door and jumped in.”He looked like a normal person. But after I saw his bloody hand I knew something wasn’t right and I was like, yeah, I’m not taking him anywhere,” the witness said. “And he gets out … takes off.”The woman who was killed was at a Wells Fargo bank at the shopping center.”We are deeply saddened that an incident at our Murray Hill Marketplace branch in Beaverton resulted in the senseless death of one of our customers and injuries sustained by others,” Wells Fargo said in a statement. “We offer our heartfelt condolences to those who lost their loved one. Our thoughts are also with the innocent people who witnessed this heinous crime.”The suspect is a 20-year-old man, according to Beaverton Police Department.Of those injured, one — an adult woman — is still in critical condition. The two others suffered serious, but not life-threatening injuries, police said.