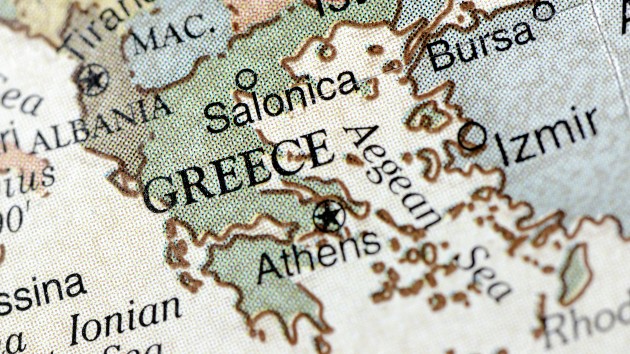 KeithBinns/iStock(LONDON) — A team of U.S. archaeologists from the University of Cincinnati (UC) have discovered two royal tombs from the Bronze Age in a find that promises to shed light what life was like in ancient Greece. The two tombs were discovered in Pylos, Greece last year, but the discovery was only announced on Tuesday after more than 18 months of excavation and documentation. The tombs contained items of jewelry, including a gold ring engraved with two bulls flanked by sheaves of grain and a pendant engraved with the likeness of an ancient Egyptian goddess which the researchers say could help tell stories of life in Greece from 3,500 years ago.The team, led by Jack Davis and Sharon Stocker from UC’s Classics Department, came across the new tombs while investigating the grave of an ancient Greek, nicknamed the “Griffin Warrior,” which they had discovered nearby in 2015. The beehive-shaped tombs had been long-hidden by an estimated 40,000 stones which had collapsed in on the tombs thousands of years ago, filling the interiors with rubble.The rarity of the discovery was not lost on the researchers.

“It soon became clear to us that lightning had struck again,” Davis said. The tombs’ walls were marked with flakes of gold leaf, which would have once covered the walls entirely, indicating that the tombs belonged to two families from the highest echelons in Ancient Greek society. “I think these are probably people who were very sophisticated for their time,” Stocker said. “They have come out of a place in history where there were few luxury items and imported goods. And all of a sudden at the time of the first tholos tombs, luxury items appear in Greece.”“You have this explosion of wealth. People are vying for power. It’s the formative years that will give rise to the Classic Age of Greece,” she added. The team will continue working at the site for the next two years, and hope to discover more ancient treasures. “It has been 50 years since any substantial tombs of this sort have been found at any Bronze Age palatial site,” Davis said. “That makes this extraordinary.” Copyright © 2019, ABC Audio. All rights reserved.