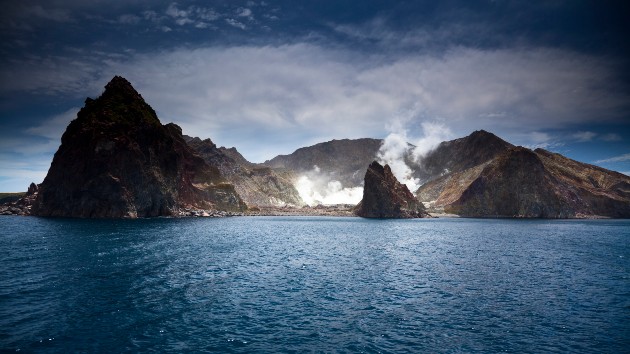 dan_prat/iStock(LONDON) — New Zealand authorities believe the bodies of two tourists still missing in the wake of a deadly volcanic eruption have been washed out to sea. Hayden Bryan Marshall-Inman, 40, from New Zealand, and Winona Langford, 17, from Australia, were among 47 people visiting White Island when the volcano violently erupted — seemingly without warning — on the afternoon of Dec. 9. Most people were evacuated from the volcanic island by helicopter that day and taken to hospitals, while eight others were stranded there, according to New Zealand’s national police force.Marshall-Inman and Langford are the only people who remain unaccounted for and are believed to be dead. “It is the considered view of experts that those bodies have been washed out to sea following a significant weather event on the island the night of the eruption,” New Zealand Police Deputy Commissioner John Tims said in a statement Wednesday.Rescue workers were unable to return to White Island for three days last week due to dangerous and unpredictable conditions. A 5-mile no-fly zone is in place around the island, along with a 5-nautical-mile maritime exclusion zone. At least 10 people have died from their injuries since being rescued, while authorities have retrieved six bodies from the island during a major search and recovery operation that began last Friday — bringing the official death toll to 16. Several Americans were among the dead. The bodies of Marshall-Inman and Langford were thought to be in the waters surrounding the volcanic island, and divers were deployed to look for them. But their remains were nowhere to be found.”There is no guarantee their bodies will be located, and police recognize the immense pain this must cause their families,” Tims said. “With the chances of finding their bodies diminishing, the nature of the recovery operation is changing. The national operation will now revert to a local-led response.” “It’s important to be clear — we haven’t given up,” he added. “We have always had an expectation of ourselves and others that all bodies would be recovered, so it’s both disappointing and frustrating to be in this position. I’m sure I can speak on behalf of other agencies as well as police when I say, if the need changes, we will respond.”Meanwhile, dozens of people suffering burns from the volcanic eruption remain hospitalized and medical staff are working around the clock to care for them. Many of the victims sustained severe burns covering over 90% of their bodies, according to Dr. Peter Watson, chief medical officer of the Counties Manukau District Health Board. The New Zealand Police have launched an investigation into the circumstances of the deaths and injuries on White Island, also known as as Whakaari, which is home to the country’s most-active cone volcano. The uninhabited island, located about 30 miles from mainland New Zealand, has had regular eruptions for years but has become a widely popular tourist destination, accessible only by boat and helicopter.Copyright © 2019, ABC Audio. All rights reserved.