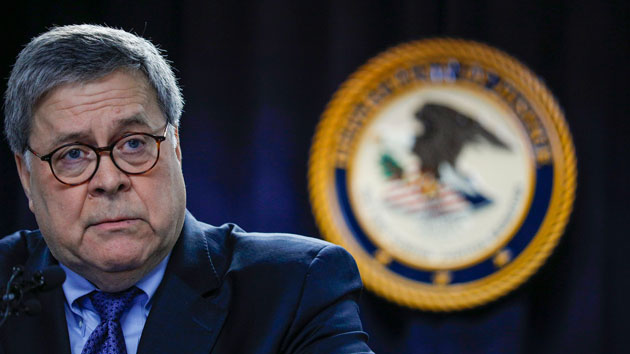 Bill Pugliano/Getty Images(WASHINGTON) — Attorney General Bill Barr said Wednesday that the secretive surveillance court under heavy scrutiny following a scathing Department of Justice watchdog report released last week remains a “critical” tool for law enforcement, despite recent suggestions by some Republicans that it could be shut down.”I think [the Foreign Intelligence Surveillance Act] is a critical tool to protecting Americans,” Barr said at a news conference in Detroit. “We are committed to preserving FISA and we think all Americans should be committed to preserving FISA. It is essential to protect the security of the United States.”Barr’s comments came after a second day of testimony before Congress by DOJ inspector general Michael Horowitz, whose report last week examining the origins of the Russia investigation uncovered a series of errors and misconduct by FBI officials involved in the surveillance of former Trump campaign adviser Carter Page.After Horowitz’s testimony, the chairman of the Senate Committee on Homeland Security & Governmental Affairs Sen. Ron Johnson, R-Wis, said the revelations were so troubling to him he believes “the FISA court is in jeopardy.” That echoed a sentiment from Senate Judiciary Chairman Sen. Lindsey Graham, R-S.C., last week, who said he had “serious concerns about whether the FISA court can continue unless there’s fundamental reform.”On Tuesday, the FISA court issued a rare order that rebuked the FBI’s handling of the Page warrant and demanded that the FBI and DOJ respond with a series of planned reforms to ensure the misconduct could not be repeated.”The frequency with which representations made by FBI personnel turned out to be unsupported or contradicted by information in their possession, and with which they withheld information detrimental to their case, calls into question whether information contained in other FBI applications is reliable,” the court wrote.At the Wednesday event alongside FBI Director Christopher Wray, Barr expressed confidence in reforms that Wray has already presented — accompanied the IG report — and said the two would continue working together if there were any further to add.”We take the findings of the inspector general very seriously and we are working hand in hand to adopt reforms and change procedures and so forth that will address the issues,” Barr said. “And I have to say that I greatly appreciate Director Wray’s leadership on this, because he didn’t wait around for the IG report. He was working on these issues for quite a while and had put together a long list of steps that I think do address the problems found in the IG report.”Barr’s comments followed a tweet by President Trump last week that blasted Wray’s assessment of the IG report and questioned whether Wray was the right person to continue leading the bureau.”I don’t know what report current Director of the FBI Christopher Wray was reading, but it sure wasn’t the one given to me. With that kind of attitude, he will never be able to fix the FBI, which is badly broken despite having some of the greatest men & women working there!” Trump tweeted.The event was the first joint appearance between Barr and Wray following a very public split last week in their assessment of Horowitz’s findings.While Wray told ABC News in an exclusive interview last week that he accepted Horowitz’s findings and sought to highlight his assessment the Russia investigation was properly predicated, Barr and U.S. attorney John Durham both released statements saying they disagreed with the assessment that the investigation was launched with proper cause.Barr also called the investigation a “travesty” and said the misconduct by FBI agents left open the possibility had acted “in bad faith.”At the Detroit event, Wray highlighted comments he made last week saying the report “describes behavior and performance that I consider unacceptable, and also unrepresentative of who we are as an institution.”The two made the remarks at an event where Barr announced the launch of a new anti-crime initiative dubbed “Operation Relentless Pursuit,” which will surge federal law enforcement resources to cities with crime rates above the national average.The initiative will look to increase the number of law enforcement officers through $71 million in federal grant funding in seven cities including Memphis, Baltimore, Kansas City, Cleveland, Milwaukee and Albuquerque.”While nationwide violent crime rates are down, many cities continue to see levels of extraordinary violence,” Barr said in the news conference. “Our view is we go where justice is needed most. We go where the trouble is.”Copyright © 2019, ABC Audio. All rights reserved.

US calls China’s abuses of Muslim minorities ‘genocide’ and ‘crimes against humanity’
How COVID-19 vaccinations are going, on a global scale
Biden to pitch an eight-year pathway to citizenship in day one immigration reform bill
Why lawmakers tested positive for COVID-19 after Capitol riot, despite vaccinations
Trump clemency list expected to include Lil Wayne and a once powerful NY politician
‘The Bachelor’ recap: A night of drama ends with a shocking departure