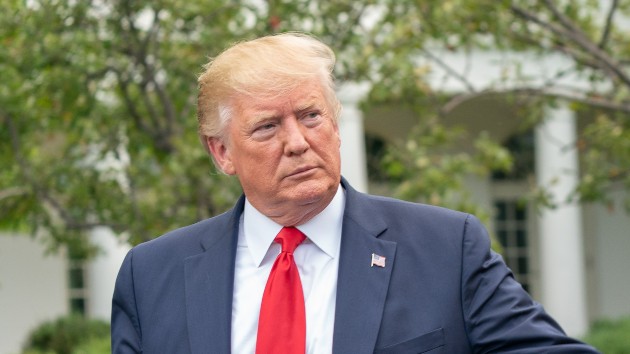 Official White House Photo by Shealah Craighead(WASHINGTON) — The House on Wednesday was poised to impeach a sitting president for just the third time in American history, with Democrats appearing to have the votes needed to pass two articles of impeachment charging President Donald Trump with abuse of power and obstructing Congress. The articles are expected to pass on party-line votes, teeing up a Senate trial in January. “No Member came to Congress to impeach a President,” House Speaker Nancy Pelosi wrote in a letter to Democrats Tuesday. “But every one of us, as our first act as a Member of Congress, stood on the House Floor, raised our hand and took a sacred oath: ‘I do solemnly swear that I will support and defend the Constitution of the United States against all enemies, foreign and domestic.’ That oath makes us Custodians of the Constitution. If we do not act, we will be derelict in our duty.””I have no doubt the American people will hold you and the Democrats fully responsible in the upcoming 2020 election. They will not soon forgive your perversion of justice and abuse of power,” Trump wrote in an angry letter sent to Pelosi on Tuesday. Here is how the debate is unfolding:

9 a.m. House convenes “Give them wisdom and discernment,” the House chaplain says as the House convenes. After the opening prayer, members recite the Pledge of Allegiance. Republicans immediately move to adjourn, triggering a 15-minute vote series. 8:53 .a.m. About 6 hours of debate expected after procedural votes The House Rules Committee decided late Tuesday to debate the articles of impeachment in the full House for six hours Wednesday. That would put a vote on track for late in the afternoon or early evening. The debate on the articles of impeachment will begin after the House first debates and votes on the rule. This was the first time in American history that the House Rules Committee, which is traditionally used by the speaker to control the floor schedule of the chamber, has ever taken up impeachment.

8:40 a.m. ABC’s Quinn Scanlan and Benjamin Siegel report that 27 House Democrats representing districts that voted to elect Trump in 2016 will vote in favor of impeaching the president. One Democrat said he would vote only for one of the articles and two have not said how they will vote. Rep. Jeff Van Drew has said he will vote against impeachment and there are reports he will change his party affiliation to become a Republican. Siegel reports that as of Wednesday morning, he is still registered as a Democrat and will likely be for the vote.

8:30 a.m. Trump is tweeting Wednesday morning ahead of the historic House proceedings. “Can you believe that I will be impeached today by the Radical Left, Do Nothing Democrats, AND I DID NOTHING WRONG! A terrible Thing. Read the Transcripts. This should never happen to another President again. Say a PRAYER!,” he says. ABC News’ Ben Gittleson at the White House reports” “Say a prayer” seems to be a pretty clear reference to Pelosi saying she prays for Trump and is approaching the process prayerfully, something Trump mocked and criticized in his letter to the speaker on Tuesday.The vote on the House floor caps off weeks of hearings in a bitterly divided House, with Democrats and Republicans at odds over Trump’s withholding of military aid to Ukraine amid efforts to pressure the country to launch investigations into former Vice President Joe Biden family’s business dealings and unsubstantiated claims of Ukrainian election interference in 2016. After more than 72 hours of public hearings and testimony from more than a dozen witnesses and several constitutional scholars, Democrats determined Trump “placed his personal, political interests above our national security, our free and fair elections, and our system of checks and balances,” they wrote in a Judiciary Committee report issued earlier this week.

“He has engaged in a pattern of misconduct that will continue if left unchecked,” they added.Republicans have stood by the president and dismissed the Democrats’ case, accusing them of rushing to impeach Trump without sufficient evidence of wrongdoing, and of denying him due process through the impeachment proceedings. Every House Republican — including the three remaining members from districts carried by Hillary Clinton in 2016 — appeared ready to vote against impeaching Trump on Wednesday. Ahead of the historic House vote, more than two dozen lawmakers from the 31 Democratic House districts carried by Trump in 2016 announced plans to vote for both articles of impeachment.That group included many of the so-called “majority makers” who helped Democrats flip Republican-held seats and capture the House majority in 2018. “The testimony and evidence put forth led me to a clear conclusion,” Rep. Lauren Underwood, D-Ill., a freshman in a seat formerly held by House GOP Speaker Dennis Hastert, said in a statement Tuesday.Rep. Jared Golden, D-Maine, a former Marine who served in Afghanistan, appeared to be the only House member preparing to split his vote, announcing Tuesday that he would vote to charge Trump with abusing power, but not with obstructing Congress. Trump and administration officials worked “to leverage the powers of the presidency to damage a political opponent and strengthen the president’s reelection prospects,” Golden, who won his seat by less than 3,000 votes in 2018, wrote in a statement posted online.Golden also said that he did not believe Democrats had exhausted all their options in seeking White House compliance with the subpoenas issued in the Ukraine investigation. “While the president’s resistance toward our investigative efforts has been frustrating, it has not yet, in my view, reached the threshold of ‘high crime or misdemeanor’ that the Constitution demands,” he wrote.Rep. Jeff Van Drew, D-N.J., the only other Democrat to oppose impeachment, told staff over the weekend that he was preparing to become a Republican ahead of the vote. On Tuesday, he refused to say if he still planned to switch parties.