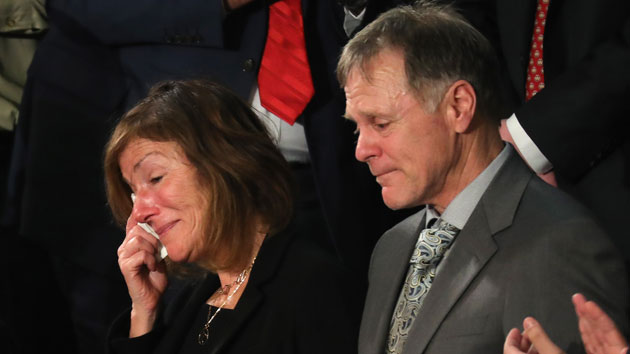 Chip Somodevilla/Getty Images(WASHINGTON) — Cindy and Fred Warmbier — the parents of American college student Otto Warmbier who died after being detained by North Korea — have a message for Kim Jong Un’s regime.”People matter. Otto matters,” Cindy said. “We’re never going to let you forget our son.”The Warmbier’s visited Capitol Hill on Wednesday to mark the passage of legislation named in their son’s honor. The Otto Warmbier Banking Restrictions Involving North Korea, or BRINK, Act — was approved by Congress as part of the enormous defense spending bill known as the National Defense Authorization Act (NDAA). President Donald Trump is expected to sign the bill sometime this week.The bill requires mandatory sanctions on foreign banks and other businesses that deal with North Korea, which is a measure meant to tighten the economic pressure on Pyongyang amid stalled talks with the Trump administration.”This banking bill is very important to our efforts because it gives us more tools to force the North Koreans to engage on some level,” Fred said.That engagement has been shut down since the North Koreans walked out from a series of meetings with U.S. negotiators between Oct. 4-5 held in Stockholm, demanding that the U.S. change its position. In recent weeks, as North Korea threatens a “Christmas surprise,” possibly a missile test, China and Russia have proposed easing sanctions on Pyongyang to move talks forward.Chief U.S. negotiator Stephen Biegun is in Beijing today to push back on that idea, as the U.S. continues to push for verifiable steps from North Korea to dismantle its nuclear weapons program first.Asked if she had a message for Trump, Cindy Warmbier shared a warning on how to deal with Kim’s regime: “I’ve always said the same thing, don’t make a bad deal and don’t believe a word they say.””Nothing’s changed,” she said.The bill’s bipartisan sponsors — Sens. Sherrod Brown and Rob Portman of Ohio, the Warmbier’s home state; Republican Sen. Pat Toomey of Pennsylvania and Democrat Chris Van Hollen of Maryland — celebrated the legislation’s passage and praised the Warmbier’s commitment to holding North Korea accountable by working across party lines in a divided Washington.”I don’t know if Fred and Cindy are Republicans or Democrats,” Brown said. “What I do know is that Fred and Cindy love their son and love this country and their commitment every hour of every day of every week of every month since their son’s death has just been an honor to watch.”Portman, who said North Korea “effectively killed” Otto, added that he believed the 22-year old would have approved of the bill.Otto was detained in North Korea’s capital in December 2015 while on a guided tour, later accused by the regime of stealing a propaganda poster. The University of Virginia student suffered brain damage during his imprisonment and was eventually released by North Korea to return to the U.S. in June 2017.Six days after returning to his family in Ohio, Otto died.Last Thursday would have been his 25th birthday. Copyright © 2019, ABC Audio. All rights reserved.