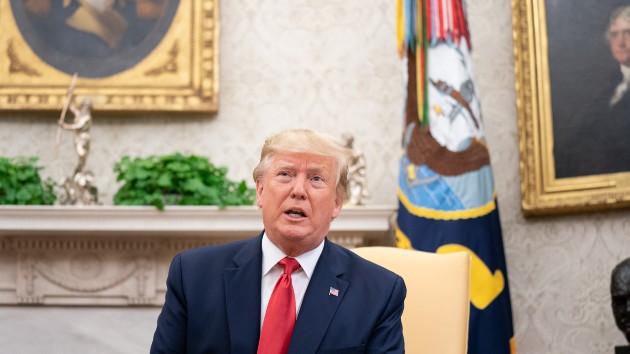 Official White House Photo by Shealah Craighead(WASHINGTON) — On the eve of an expected historic vote in the House of Representatives to impeach him, President Donald Trump on Tuesday sent a personal six-page letter to House Speaker Nancy Pelosi railing against what he calls an “illegal, partisan attempted coup.” “I write this letter to you for the purpose of history and to put my thoughts on a permanent and indelible record,” the president writes in the letter, even as he also acknowledges that he doesn’t expect it to actually change the outcome of Wednesday’s anticipated vote that will make him only the third U.S. president to be impeached. “One hundred years from now, when people look back at this affair, I want them to understand it and learn from it, so that it can never happen to another President again,” the letter reads.”It is time for you and the highly partisan Democrats in Congress to immediately cease this impeachment fantasy and get back to work for the American People,” he writes.

Letter From President Trump… by Anonymous TjVFb1a9 on Scribd

While the president has previously vented extensively on Twitter and in public remarks, the letter represents a compilation of the president’s grievances with the process and how Pelosi has conducted herself.Making no attempt to mask his feelings of personal animus toward the speaker, the president accuses Pelosi of being inauthentic for saying she prays for the president. “You are offending Americans of faith by continually saying ‘I pray for the president’ … when you know this statement is not true, unless it is meant in a negative sense,” the president writes.He goes on to further take issue with her demeanor throughout this process, writing that “Perhaps most insulting of all is your false display of solemnity … no intelligent person believes what you are saying.”He contends that “more due process was afforded to those accused in the Salem Witch Trials,” and accuses Pelosi of turning what he says is a “policy disagreement” into an impeachable offense. The president even harks back to his Electoral College victory some three years ago, saying that Pelosi is trying to undo the results of the 2016 election because “your chosen candidate lost the election” and says Pelosi is suffering from a case of “Trump derangement syndrome.” “You view democracy as your enemy!” the president writes to Pelosi in the exclamation point-laden letter. “You are the ones interfering in America’s elections. You are the ones subverting America’s Democracy. You are are the ones Obstructing Justice. You are the ones bringing pain and suffering to our Republic for your own selfish personal, political, and partisan gain,” the president writes. Minutes after the president’s angrily-worded letter to Pelosi was made public to reporters, the president struck a notably more subdued tone in comments before cameras as he was seated next to the visiting president of Guatemala. Asked by a reporter if he takes any personal responsibility for the looming impeachment, the president said he takes “zero” responsibility. “No I don’t take any, zero, to put it mildly,” Trump said. “They took a perfect phone call that I had with the President of Ukraine, an absolutely perfect call … to impeach the president of the Untied States for that is a disgrace and it’s a mark on our country.” Copyright © 2019, ABC Audio. All rights reserved.