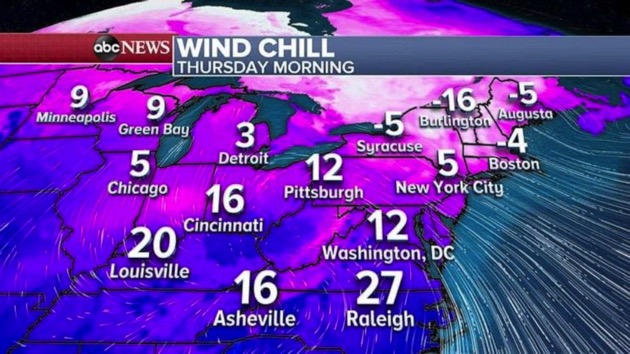 ABC News(NEW YORK) — Wednesday an Arctic cold front moved through the Northeast, bringing a quick burst of snow from Philadelphia to New York City and Boston, with gusty winds and reduced visibility.Wind gusts in Boston were 41 mph, at New York City’s Kennedy Airport they were 37 mph, in Philadelphia they were 36 mph, in Syracuse they were 37 mph and in Albany they were 38 mph.Snowfall totals where not big at all, about a half an inch in New York City and 2-3” from Philadelphia to Massachusetts, with Boston not getting much snow at all.This morning, five Northeast states from New York to Maine are under wind chill advisory, where wind chills could drop as low as 25 below zero.Wind chill is below zero in Boston, in the single digits in New York City and Philadelphia, and in the lower teens in Washington, D.C.This cold blast extends all the way into the Deep South and even into Florida, where a freeze warning has been issued.This cold will not last long in the Northeast. as a warming trend is expected for the weekend — just in time for Christmas.But there’s bad news for the West Coast as a series of storms will bring a threat for flooding, mudslides and heavy mountain snow to Washington, Oregon and parts of Northern California.Numerous snow, flood and wind alerts have been issued for the West as an atmospheric river of moisture is moving in over the next several days.By Sunday and the start of the holiday week, heavy rain is expected in California with heavy mountain snow. Travel could be impacted in San Francisco by Sunday morning.Heavy rain up to 6 inches is possible on the West Coast, with the threat of flooding and mudslides. In the mountains, some areas could see as much as 5 feet of snow.Along the Washington and Oregon coast, winds could gust as high as 60 mph, with wind damage possible.