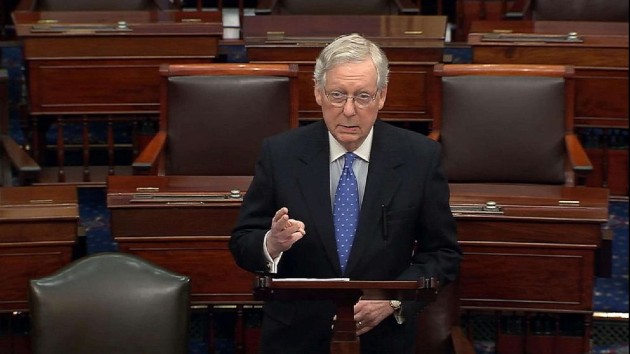 ABC News(WASHINGTON) — Sen. Mitch McConnell late Thursday said he had a “cordial” meeting with his Democratic counterpart over how the Senate would proceed with a trial of President Donald Trump, but said “we remain at an impasse.”McConnell has resisted a demand from Minority Leader Chuck Schumer and other Democrats that a Senate trial must include live witnesses or wouldn’t be “fair” or “real.”The situation is further complicated by House Speaker Nancy Pelosi, raising fairness concerns, insisting that she would not send over the articles of impeachment to the Senate until she knew what a trial would look like.McConnell tweaked Pelosi for holding back the articles, saying, “I admit I’m not sure what leverage there is in refraining from sending us something we do not want.”He told senators to be prepared to return for votes on Jan. 6.Earlier Thursday, just hours after Trump was impeached by the House for abuse of power and obstruction of Congress, McConnell delivered a blistering indictment of the impeachment inquiry, accusing House Democrats of “partisan rage” that will create a “toxic new precedent that will echo well into the future.””For the very first time in modern history we have seen a political faction in Congress promise from the moment a presidential election ended that they would find some way to overturn it,” McConnell said.McConnell blasted the House impeachment inquiry as the “most rushed, least thorough, and most unfair impeachment inquiry in modern history” which was “poisoned by partisanship” from the get-go.”More than a year of hearings for Nixon, multiple years of investigation for Clinton—and they’ve impeached President Trump in 12 weeks. Twelve weeks,” McConnell said.”But the articles aren’t just unproven. They’re also constitutionally incoherent. Frankly, if either of these articles is blessed by the Senate, we could easily see the impeachment of every future president of either party,” McConnell said. “Let me say that again: If the Senate blesses this historically low bar, we will invite the impeachment of every future president.”‘If the Senate blesses this slapdash impeachment, if we say from now on this is enough, then we invite an endless parade of impeachment trials,” he said.”Speaker Pelosi’s House just gave into a temptation that every other House in history had managed to resist: they impeached a president whom they do not even allege has committed an actual crime known to our laws. They impeached simply because they disagree with a presidential act and question the motive behind it,” McConnell said.”By the speaker’s own standards, she has failed the country. This case is not compelling, not overwhelming, and as a result, not bipartisan. This failure was made clear to everyone earlier this week, when Senator Schumer began searching for ways the Senate could step out of our proper role and try to fix House Democrats’ failures for them,” McConnell said.McConnell pointedly dared Pelosi to deliver to the Senate the two articles of impeachment that passed along party lines late Wednesday night, accusing her of being “too afraid” to transmit “their shoddy work product.”Pelosi on Wednesday declined to answer questions about the timing of when she plans to deliver the articles to the Senate for trial.”We cannot name managers until we see what the process is on the Senate side, and I would hope that that will be soon,” Pelosi said. “So far we haven’t seen anything that looks fair to us, so hopefully it will be fairer and when we see what that is, we’ll send our managers.”“Looks like the prosecutors are getting cold feet,” McConnell said.”They said impeachment was so urgent that it could not even wait for due process but now they’re content to sit on their hands. It is comical,” McConnell said.

Senate Majority Leader Mitch McConnell accuses House Democrats of being "too afraid to even transmit their shoddy work product to the Senate.""Looks like the prosecutors are getting cold feet—in front of the entire country." https://t.co/EW17rUnnGA pic.twitter.com/ZfbfsfSeF8

— ABC News Politics (@ABCPolitics) December 19, 2019 Schumer, the Democratic leader,, took to the Senate floor moments after McConnell, defended House Democrats’ inquiry and criticized the Republican Senate leader.”I hope America was watching the Republican leader deliver his speech. I truly do. Because most glaring of all, was the fact that Leader McConnell’s thirty-minute partisan stem-winder contained hardly a single defense of the president on the merits,” Schumer said.”To my Republican colleagues: our message is a simple one. Democrats want a fair trial that examines the relevant facts. We want a fair trial. The message from Leader McConnell, at the moment, is that he has no intention of conducting a fair trial, no intention of acting impartially, no intention of getting the facts,” Schumer said.”Is the president’s case so weak that none of the president’s men can defend him under oath?” Schumer said. “If the House’s case is so weak, why is Leader McConnell so afraid of witnesses and documents? We believe the House’s case is strong … but if the Republican leader believes it’s so weak, why is he so afraid of relevant witnesses and documents?””Leader McConnell claimed that the impeachment of President Trump is illegitimate because the House voted along party lines. Forgive me: but House Democrats cannot be held responsible for the cravenness of the House Republican caucus and their blind fealty to the president,” Schumer said.”Leader McConnell claimed the impeachment was motivated by partisan rage. This from the man who said, “I am not impartial. I have no intention to be impartial at all” in the trial of President Trump. What hypocrisy,” Schumer said.

Senate Minority Leader Chuck Schumer: "Leader McConnell accused the House Democrats of an obsession to get rid of Pres. Trump—this from the man who proudly declared his number one goal was to make Pres. Obama a one-term president." https://t.co/jBRj22K4Nv pic.twitter.com/BHsJT5QXXC

— ABC News Politics (@ABCPolitics) December 19, 2019 McConnell, in his remarks, also defended Trump’s decision to withhold “extraordinary amounts of sensitive information” from House Democrats as part of their impeachment inquiry.”Predictably, and appropriately, President Trump did not simply roll over. He defended the constitutional authority of his office,” McConnell said.McConnell declared that the Senate’s duty “is clear” and vowed that his chamber will fulfill its duty by acquitting Trump should the Senate head into an expected trial in January.”The Senate must put this right,” McConnell said. “We must rise to this occasion.