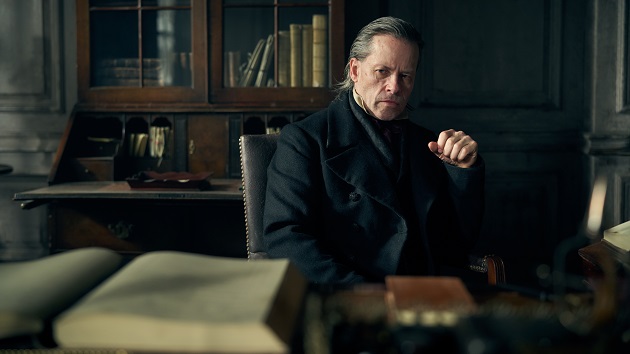 Robert Vidlasky/FX(NEW YORK) — Charles Dickens published A Christmas Carol 176 years ago on this very day.  For a story so integral to the holidays, it’s no wonder it’s been adapted for various stage productions, radio dramas, TV series and movies.

However, FX’s new version of A Christmas Carol, which premieres tonight, is significantly darker than recent versions the modern audience has grown accustomed to.

Scrooge, played by Guy Pearce, is more sinister than his traditional incarnation as the curmudgeonly old man, which makes his change of heart more of a challenge.

Pearce, speaking with ABC Audio, said there’s a deliberate message behind his Scrooge. “I think we all bumble our way through life, we lie and we cheat and we do the best that we can, but we don’t realize the mistakes we’re making and we cover things up and we pretend we are OK when we are not,” He says.  “And then at Christmastime, we all go ‘Yay! Smile! Merry Christmas, everything is good!’ you know? And in a way Scrooge is there to remind us how hypocritical we can all be.”

Pearce also added the movie heavily emphasizes how important it is to be kind to others and ourselves, “I think that’s something that everyone can relate to. Because, we’ve all had hard times, we’ve all been through difficult things, and you know I think redemption is something we can all hope for I guess.”

The television adaption also stars Joe Alwyn as Bob Cratchit, a character who also received a personality change for this darker retelling.  “I suppose he’s got a little bit more pluck and backbone in this one. He kind of stands up to Scrooge as much as he can,” said the actor to ABC Audio.

A Christmas Carol premieres tonight on FX at 7:30 p.m. ET.