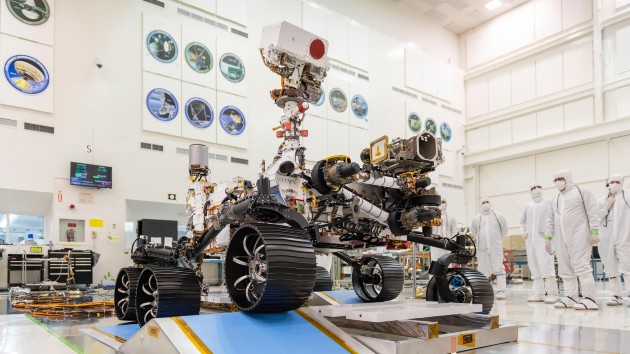 NASA/JPL-Caltech (NEW YORK) — NASA engineers took the Mars 2020 rover out for a spin this week for the first time at a lab in California, and announced the next time it drives will be atop red Martian soil. “Mars 2020 has earned its driver’s license,” Rich Rieber, the lead mobility systems engineer for Mars 2020, said in a statement Wednesday.”The test unambiguously proved that the rover can operate under its own weight and demonstrated many of the autonomous-navigation functions for the first time,” he added. “This is a major milestone for Mars 2020.”Video of the test drive shows the latest rover is an incredibly steady — albeit slow — driver, as it inched back and forth through NASA’s Jet Propulsion Laboratory in Pasadena for more than 10 hours.The Mars 2020 rover is set to head towards the Red Planet in the summer of 2020, with a mission of searching for signs of past (microbial) life, learn more about Mars’ climate and geology as well as collect samples. Ultimately, the rover has the goal of paving “the way for human exploration” of Mars, NASA said in a statement.The revamped Mars 2020 rover is smarter than its predecessors, Opportunity and Curiosity, according to NASA. Mars 2020 is “designed to make more driving decision for itself than any previous rover,” and is equipped with “an extra computer ‘brain’ for processing images and making maps,” the agency said in a statement. After 15 years roaming the planet, Opportunity died on Mars earlier this year following a massive dust storm. Curiosity still roams Mars, and sometimes sends back “breathtaking” selfies. Following the successful test drive, John McNamee, the Mars 2020 project manager, said: “We can’t wait to put some red Martian dirt under its wheels.” Copyright © 2019, ABC Audio. All rights reserved.