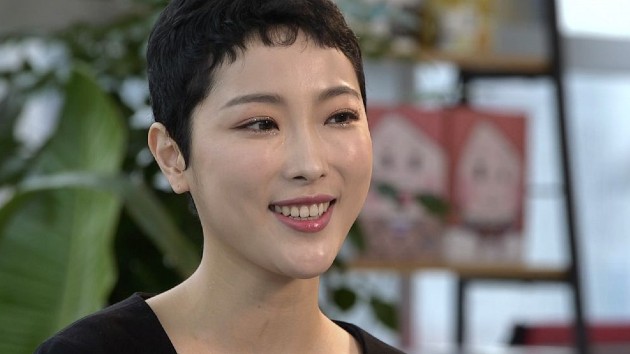 ABC News(SEOUL, South Korea) — Dawn Lee, a South Korean beauty YouTuber, has decided to share her experience of fighting blood cancer. Lee, 29, was diagnosed with lymphoma 10 months ago, and instead of breaking down emotionally, she found strength in sharing her process of battling it. She said she saw no reason to hide her symptoms from the beginning.”Why should I hide this? It wasn’t my fault,” she said. Lee’s YouTube upload on her first chemotherapy treatment and shaving her head went viral — more than five million views — and she stayed up all night reading comments of people rooting for her. “Not just Korean subscribers, but so many foreign viewers left comments showing support,” Lee told ABC News. “I thought, ‘I have no choice but to get better."”Like many beauty bloggers, Lee films makeup tutorials and vlogs to share her daily life and interact with subscribers. She’s now decided to shoot make-up tutorials linked to her condition, such as wig styling and posh looks for short hair.Even after her diagnosis, Lee said she could think of no reason to quit posting to her YouTube channel. “I want to keep my identity as a beauty YouTuber, and while I’m fighting cancer, I want to give hope to those people who are going through the same experience,” she said.She uploads at least one video per week and randomly talks to subscribers via Instagram live. She calls her subscribers “morning stars” because they shine in the sky at “dawn” and help energize her. “When I am talking to fans, they make me believe that I am a good person, and that I really want to become one,” she said, tearing up.Most subscriber comments are cheers for her to make a full recovery and thanks for her positive attitude, which provides them with courage.”Her courage to share the cancer-fighting journey makes her even more ‘beautiful,’ empowering countless people,” Sorah Choi, a college junior who has watched Lee’s YouTube channel for four years, told ABC News. “I pray for her to get well soon. I know she will make her way through cancer with her positivity,” Carina Lee, an assistant TV programmer in Seoul, said of Lee, her role model. “Apart from fighting cancer, I can sense from her videos that she’s trying hard to be happy, and I root for that.””You never know what will happen the next day,” Lee said. “I wish for them to live one day to the fullest.” In facing her personal challenge, she’s spoken to groups on fighting cancer, given speeches, been photographed sporting hairless looks and she plans on recording a song soon. “I’m turning 30 years old next year,” said Lee, smiling hopefully. “I’m thinking of throwing a 30-year anniversary party with subscribers my age.”