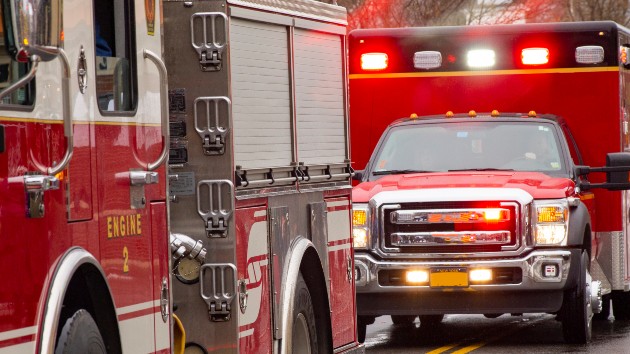 JeffKontur/iStock(PHILADELPHIA) — Two missing people are believed to be trapped under floors of debris after a massive fire and explosion caused three Philadelphia rowhomes to collapse. Three homes were completely demolished and two others suffered “severe structural damage” when the powerful blaze ignited around 11:30 a.m. Thursday, said Philadelphia Fire Commissioner Adam Thiel. “It looks like a bomb exploded,” one witness told ABC Philadelphia station WPVI-TV. “It was literally a firestorm,” said Thiel.

Fire commissioner: Lots of setup work needs to be done before they can start going through the rubble at site of South Philly explosion. Street in front compromised. pic.twitter.com/PE0EXA9ush

One person became trapped under “a couple floors of rubble,” and despite two attempts, the collapse was too severe for fire crews to rescue him or her, Thiel said at a news conference Friday. And investigators are “fairly confident” — based on interviews with family — there’s a second person missing in one of the adjacent rowhomes, Thiel said. “We can’t say whether or not somebody is deceased,” Thiel said. While those are the only two individuals reported missing, Thiel said there’s also the possibility that someone was walking in front of those homes at the time of the blast and became trapped.Thiel said the excavation process has not yet begun. He said the remnants of the buildings will have to be taken apart piece by piece and that setup work needs to be done before crews use heavy equipment to de-layer the collapsed buildings and sift through the debris. When chaos broke out on the South Philadelphia street Thursday, Thiel said citizens risked their lives to try to rescue “complete strangers.” “We really saw the best of Philadelphia yesterday in the wake of this tragic event,” Thiel said. Those Good Samaritan were not hurt, he said. About 60 residents have been evacuated from the block. The cause of the blaze is not known. Philadelphia Mayor Jim Kenney tweeted Friday, “Deeply upset about this tragic incident in South Philly. Praying for the families impacted during this difficult time. Thanks to @PhillyFireDept, @PhilaOEM, and our partners for the incredible response yesterday and their continuing work in the days ahead.”