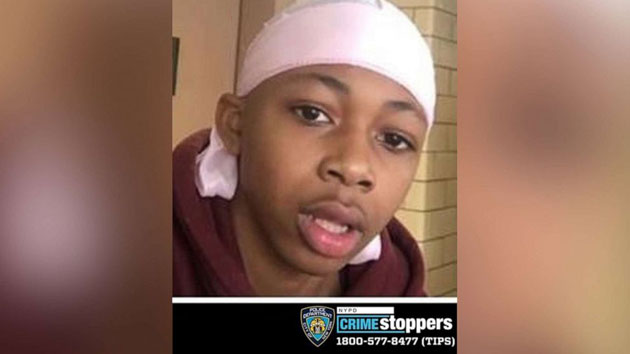 NYPD(NEW YORK) — New York City police released images Friday of a person they are looking for “in connection” to the killing of an 18-year-old Barnard College student, in hopes that the public can help locate him.Authorities did not identify the boy and only described him as someone “in connection with this incident.”Tessa Majors was fatally stabbed on Dec. 11, near the private women’s liberal arts college in Upper Manhattan.Authorities have initiated an “all-hands-on-deck” search for a 14-year-old boy after he allegedly bolted from a car while he was on his way to turn himself in earlier this week, according to police sources.NYPD Chief of Detectives Rodney Harrison told ABC News he “confident” the teen will be tracked down.Another teenager, a 13-year-old boy, has been arrested and charged with murder, though police do not believe he is the killer of Majors.The 13-year-old told detectives that he saw one of his companions stab the college student with a red-handled knife, according to police testimony in family court.Anyone with information in regard to the identity of the male is asked to call the NYPD’s Crime Stoppers Hotline at 1-800-577-TIPS (8477) or for Spanish, 1-888-57-PISTA (74782). Copyright © 2019, ABC Audio. All rights reserved.