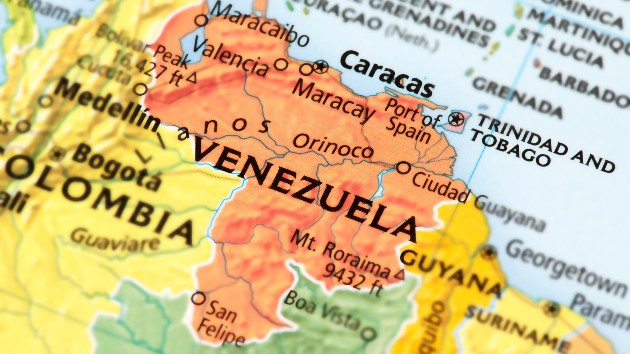 omersukrugoksu/iStock(WASHINGTON) — Nearly one year after the U.S. recognized Venezuela’s opposition leader as its legitimate president and vowed that strongman Nicolas Maduro would be pushed from power, Maduro holds on, with the humanitarian crisis deepening and refugees still pouring out into the region. That deadlock has some concerned that the Trump administration’s strategy has failed and President Donald Trump has lost interest in the crisis. But U.S. and Colombian officials say they will double down on the pressure in 2020, warning Maduro must be toppled or things will reach a point of disaster for the region. “I don’t think Colombia can sustain this crisis for longer. We’re up to here,” Colombian Ambassador to the U.S. Francisco Santos told ABC News, pointing to this neck. The country hosts more than 1.7 million Venezuelan refugees, straining its economy, health care system and schools, Santos said.To U.S. officials, the solution still lies in ousting Maduro, who is backed by Russia, China and Cuba. The country’s economy has all but collapsed under his rule, marred by mismanagement, corruption and sky-high inflation. There are constant food and medical shortages, cursing a generation of children suffering from malnutrition, and a crumbling water system and power grid that make daily life miserable. “Everybody has to hope that change comes to Venezuela fast. We hoped it a year ago, we hope it today. Why? Because the humanitarian crisis is terrible and getting worse,” special envoy for Venezuela Eliot Abrams said Friday.But in the face of a year of opposition protests and a failed uprising in late April, Maduro maintains control of the military and its leadership — defying Abrams’ prediction in July that there would “absolutely” be a transition by year’s end. Those protests have been led by Juan Guaido, the president of the National Assembly — the country’s legislature that the U.S. and nearly 60 countries have recognized as its last legitimate institution, making Guaido the legitimate leader.While so much faith was put in Guaido as a way forward, his movement’s momentum seems to have stalled, with smaller crowds.

“The people are tired of protesting and not obtaining what they ask for. But the country wants a transition,” he told the Washington Post this week. Talks between Guaido’s opposition and Maduro’s government broke down in August when the government walked after the U.S. imposed tough new sanctions. The opposition officially declared negotiations dead in September, with U.S. support, although Abrams said Friday there will have to be a negotiated settlement eventually.Next month, Guaido will face re-election as the National Assembly president, a vote that Maduro and his allies are trying to spoil by threatening or arresting members, forcing others into exile, and trying to bribe those still in country, according to Abrams. Abrams, who met with members of the opposition this week in Washington to talk next steps, said Friday some lawmakers have taken bribes to abandon Guaido in the vote. But he didn’t think there were enough to throw his victory into doubt: “He has the votes to be re-elected.”With pressure growing on Guaido, the U.S. is planning to up the ante on Maduro in 2020. Neither Abrams nor Santos would say what moves are under consideration, but the most severe that has been floated is a U.S. naval blockade of Venezuelan oil exports to Cuba — a key source of revenue for Maduro’s government. Those shipments are already under heavy U.S. sanctions. Abrams said he wouldn’t “telegraph our punches to the Maduro regime,” but it’s certain that stricter U.S. sanctions are on the way.

“We will continue our sanctions and strengthen them,” he added. Congress also just passed $400 million for the humanitarian crisis as part of the defense budget that Trump is expected to sign, with an additional $17 million to support democracy in Venezuela.The need is only expected to deepen. The Organization for American States estimated in June that if the political and economic situation continues as is, by the end of 2020 there will be more Venezuelan refugees than Syrian refugees worldwide — as many as 8.2 million. Humanitarian groups on the ground say the world is not doing enough.

“The international community is largely ignoring the dire situation of migrants and asylum seekers in Colombia, and the humanitarian response remains severely limited, particularly in rural areas affected by armed conflict and criminal activity,” Doctors Without Borders said in a statement Wednesday.There are also concerns that Trump himself is losing interest. When asked about the issue during a photo op with Paraguay’s president last week, he was nonspecific, saying, “We are with the people of Venezuela 100 percent. It’s so important to us.” But the president hasn’t tweeted about Venezuela since September, and his only other recent mention was in a political context — at a rally in Florida, which has a large Venezuelan and Latino community. “Here in the Western Hemisphere, we are confronting the brutal menace of communism and socialism. We are proudly supporting the great people of Venezuela, Cuba, and Nicaragua in their righteous struggle for freedom. You know that,” he said to applause.Copyright © 2019, ABC Audio. All rights reserved.