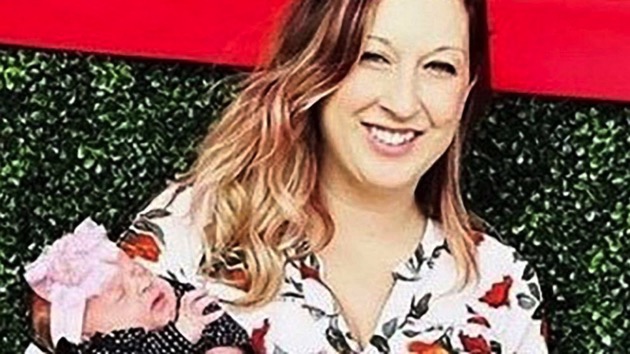 Police have released this photo of Heidi Broussard and her daughter Margot Carey after they were reported missing. – (Austin Police Department)(AUSTIN, Texas) — A body discovered at a home near Houston is believed to be that of Austin mother Heidi Broussard, who went missing with her infant daughter, Margot Carey, last week, according to Austin police.An infant girl was found alive at the scene who is believed to be Margot, Austin police said, however DNA testing is underway to confirm.One person has been arrested and charged with two counts of kidnapping and one count of tampering with a corpse, Austin Police Chief Brian Manley said at a news conference Friday.Police did not release the suspect’s identity but said that person was in custody Friday morning. Additional charges are possible, the chief said.The baby girl “is healthy and in the care of Child Protective Services,” police said.An autopsy will determine the identity of the woman believed to be Broussard, Manley said.The body and the baby were found when a dozen officers from the Texas Rangers, Texas Department of Public Safety, FBI and Austin Police Department converged on the house in northwest Harris County Thursday evening, according to ABC’s Houston station, KTRK.Authorities were focusing on a car in the back driveway of the house, KTRK reported.Broussard, 33, and her infant daughter, Margot, were last seen dropping off a child at Austin’s Cowan Elementary School on the morning of Dec. 12, according to Austin police.Investigators believe Broussard and her child returned home to their apartment complex after they left the school. They had not been heard from since, police said.Broussard’s fiance, Shane Carey, told ABC’s Austin affiliate, KVUE, that her car and all of her and the baby’s belongings were still at their home, and there were no signs of a struggle. The couple had been together for nearly 10 years, Carey said.The police chief on Friday offered his condolences that “we did not have two rescues.””Our hearts and our minds are with Heidi and her family today,” he said. Copyright © 2019, ABC Audio. All rights reserved.