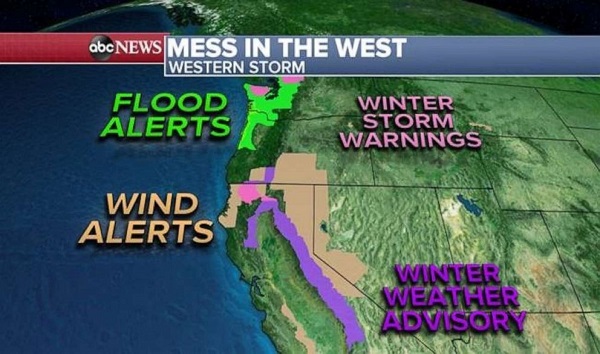 ABC News (SEATTLE) — An atmospheric river of moisture is bringing very heavy rain and mountain snow to the West Coast. As of late Friday night, Seattle-Tacoma airport recorded 3.13 inches of rain, which placed it as its fifth wettest day on record.Parts of Oregon, especially along the western slopes of the Cascades, have received over 7 inches of rain.Flood watches remain in effect this weekend through much of the Northwest coast. Winter storm warnings and winter weather advisories are in effect for the higher elevations in the Cascades and into the Sierra Nevada. Additionally there are a number of wind alerts across parts of California, Nevada and Oregon.Today, the heaviest rain will be along the Pacific Northwest coast. The heaviest snow will be on the higher elevations of the Cascades. Additionally, gusty winds over 40 mph will be possible through parts of Oregon today.Additionally, there is some risk for avalanches in parts of the Cascades, as some of the region received heavy snow last week, then heavy rain this week.The plume of moisture from the atmospheric river will slide southward along the West Coast and by Sunday, heavy rain and heavy mountain snow will reach parts of Central California and the Sierra Nevada. This could bring travel delays to the San Francisco Bay area.By Sunday night, the heaviest rain should reach Southern California. As the moisture moves southwest late Sunday and early Monday, heavy rain will push into Santa Barbara and Los Angeles County. Additionally, there will be chances for some snow above 5,000 feet with 3-6 inches possible.Additionally, a couple more bands of heavy rain and mountain snow will return to the Pacific Northwest on Monday morning.This entire setup will bring 2 to 4 more inches of rain across the Northwest coast of the U.S., with higher amounts in the higher elevations. Then early in the upcoming holiday week, over 2 inches of rain is possible parts of Southern California through Monday night, with 1 to 2 feet of snow likely in the Sierra through Monday night.As this storm slides into the desert and the Intermountain West by Christmas Eve on Tuesday, another system will quickly sneak in behind it, likely bringing active weather to the West Coast for the second half of the holiday week.Meanwhile, a developing storm in the South will push significant moisture into the Gulf Coast and Southeast this weekend into early next week.Through this weekend, 2 to 3 inches of rain is possible from Mississippi to South Carolina, which could cause localized flooding issues and travel delays.As the system moves to the Southeast Atlantic coast early next week, an additionally 1 to 2 inches of rain is likely in South Carolina, and some of that will spread into North Carolina.The total rainfall from this storm in parts of the Southeast could exceed 6 inches of rain in spots, which could result in flash flooding. This could mean hazardous travel on the interstates.Additionally, the storm could bring some gusty winds over 40 mph to some of the coastline along the Gulf Coast and Southeast. Copyright © 2019, ABC Radio. All rights reserved.